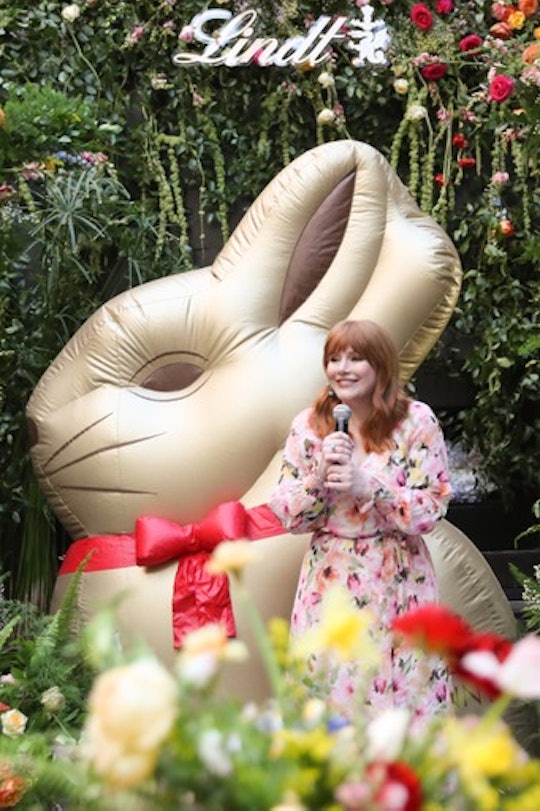 The actor and director revealed her father Ron Howard’s parenting weakness and answered a 12-year-old’s questions about The Mandalorian.

If you are here for a hard-hitting interview with actor and director Bryce Dallas Howard, well, I’m sorry to tell you that you’re in the wrong place. If you’re here for chocolate and Star Wars, well, then, right this way. On a blustery Friday afternoon this month, I attended an event hosted by Howard and Lindt to promote the chocolatier’s Golden Bunny, an adorable foil-covered Easter treat. Because of the aforementioned delicious chocolate rabbits, my children were with me. And because Howard has directed several episodes of both The Mandalorian and The Book of Boba Fett, we were all eager to speak to her.

What followed was one of the more chaotic celebrity interviews I’ve ever been a part of. I asked a few questions, my daughter, who is 10, described her school play to a fellow thespian, and my son, 12, grilled Howard on Star Wars arcana. Howard, who is herself a mother of two (a son, 15, and a daughter, 10), was unfazed by our family circus. I’m honestly not sure which was the bigger treat: The chocolate haul or our lovely conversation with a member of George Lucas’s inner circle.

What follows is our conversation, condensed and edited for clarity, and because at one point my son asked Howard why Stormtroopers were such terrible shots and she generously acknowledged that he was absolutely right that they couldn’t hit the side of a Bantha.

Elizabeth Angell: Do you all have Easter traditions as a family? [Ed Note: Howard’s father is director Ron Howard. This is my sly way of asking her about him.]

Bryce Dallas Howard: We do, yeah. There's a term called "run of show" when you're putting on a show or something like that, and it's basically the order of things. And that's kind of what we have in our family, and it started when we were kids.

EA: Who gets to direct the Easter egg hunt? [Ed Note: See? Sly.]

BDH: It's our mom. Our mom was always in charge of that and is still in charge of it. And it's really fun because every single year we're like, "Is the Easter bunny going to show up or not?" And whenever it happens, we're ecstatic. And it's a big thing because there's lots of kids in our family. And so, we try to kind of event-ize it. Because what we've learned is that this is the best way to create memories.

EA: I imagine that your dad is a great grandfather. [Giving up on the sly thing.]

EA: Thank God. Because, I mean, I would be devastated if you burst my bubble.

BDH: He is what he seems to be. He's very similar as a grandfather as he was as a father. Loving, attentive, patient, talks about feelings. All the "people" things. It drives our mom crazy how much he talks about feelings. She's like, "Just punish them. Don't give them the chance to talk their way out of it." He's a softie, he's a real softie.

EA: Ok, so I know we don’t have that much time and we do have some important Star Wars questions. I think our first question was, how much did you know about Star Wars before you became involved and how much research did you have to do to direct the Mandalorian?

BDH: Growing up, our dad was, and still is to this day, very good friends with George Lucas who created Star Wars. We’re close in age to his kids. Last time I saw him, George was like, "I have a picture of all of you all in the bathtub together." I was like, "Awesome, George." And so, every single year for Christmas, we would get Star Wars figurines. Before I was even old enough to know who the characters were and what the stories were, I was getting these little figurines, and I was very curious about it, and I was really into it. I learned about Star Wars first through the toys. And when I was old enough to watch the movies, of course we watched the movies. And then I got even luckier, because when I was 15 years old, I went to a summer camp, and one of my friends at that summer camp is a woman named Natalie Portman.

[Ed Note: I inform my children that Portman played Padmé Amidala in the prequel films. They are suitably impressed.]

And right after we were at this camp together, she went and filmed the prequels. Since I knew George and I was friends with Natalie, and she was pretty young, she wanted to have a friend come out and visit. And so I got to go out to the set. So when I actually got to direct on Mandalorian, I didn't realize how well I knew Star Wars, but I knew it pretty well. Of course there's always more to learn. And there's this guy, Dave Filoni — do you know who Dave Filoni is?

BDH: Yeah. So, Dave Filoni, he knows Star Wars better than anyone other than George, and he was taught by George when he was doing all of the Clone Wars because they did that together. And we worked together on Mandalorian.

BDH: Without giving anything away, you are going to love the Ahsoka show that's coming up. I cannot tell you anything, but what I can say is that you being a fan of the Clone Wars will be greatly rewarded.

H: You might not have the answer to this, but Beskar, it seems to be completely impervious.

H: Mando seems to be able to be shot multiple times in the chest without taking any damage. But that seems weird to me because, even though he wouldn't sustain any damage to his suit, wouldn't he get injured on the inside and need some time to recover? You're being shot at by lasers.

BDH: You're absolutely right. He's very strong, and in Mandalorian culture, they're trained to be warriors, and so they can do that. But then, that's where bacta spray comes in as well. Because he doesn't have a bacta tank like Boba, but bacta spray is helpful. But you are absolutely right. Did you watch the Boba Fett season at all?

BDH: In the Boba Fett season, Mando got sliced by the dark saber, and then his leg was messed up. I was super excited to have that because I wanted to show he gets hurt and then heals from bacta spray. Do you have any more questions?

H: Yeah, I wanted to ask you why there are no handrails in Star Wars.

BDH: Oh my gosh I’m so glad you asked me that! I can’t tell you anything specific but all I can say is keep watching.