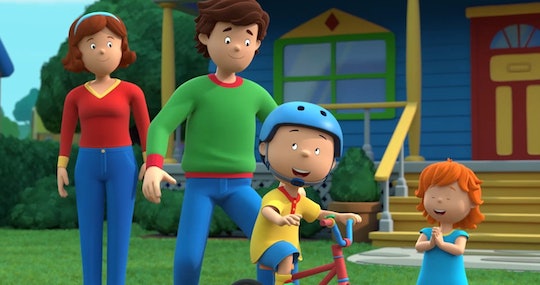 Caillou Is Coming Back With A New CGI Series & Five Specials

And Romper has an exclusive sneak peek!

He’s baaaaack! Well, coming back, anyway! Caillou, the imaginative 4-year-old Charlie Brown doppelgänger is returning to television in a CGI reboot of the series as well as five, 44-minute specials focused on special topics and significant childhood events. While no date has been announced for the CGI series’ premiere, “Rosie the Giant,” the first of the specials, will air on Peacock on Sunday, July 10 and Romper has an exclusive sneak peek.

The standalone event specials will feature storylines for Christmas, Halloween, and Summer vacation, as well as others celebrating family and discouraging bullying. As in the original series, Caillou’s inner, imaginative world will come to life, but this time the stories will be even bigger, giving audiences a better understanding of Caillou’s struggles and victories. (And doesn’t that always make a happy ending even happier?)

The first event special, “Rosie The Giant,” will focus on anti-bullying. After Rosie unwittingly bullies Caillou, his imagination takes him on an epic adventure in which he confronts a (Rosie-esque) giant who wreaks havoc on an important car race. Don’t worry: understanding, empathy, and a helpful adult win the day. The special will stream on Peacock on Sunday, July 10.

In this exclusive preview, we hear the familiar (ear-wormy) Caillou theme song with a whole new look and get a first glimpse at some of the adventures Caillou will have over the course of the five specials.

The original series was a favorite among toddlers and preschoolers from 1997 to 2010. Though, over the years, Caillou became something of a divisive figure among families. And yet, while he could sometimes be bratty, it was always in a developmentally appropriate way. For fans, Caillou reflected a familiar, everyday world to viewers (tantrums, whining, and all) while encouraging imaginative play.

“Rosie the Giant,” the first of five new Caillou specials, will stream on Peacock on Sunday, July 10.

More Like This
Take An Exclusive Sneak Peek At 'Bluey' Season 3 Before It Lands On Disney+
A Guide To Every Dog Breed In 'Bluey'
Netflix Has Lots For Families To Look Forward To This August
Exclusive: CoComelon Is Going On A Live Tour Across the U.S.