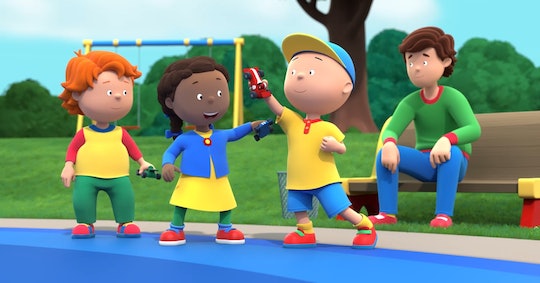 The 4-year-old with a bit of an attitude is getting a CGI reboot on Peacock.

Caillou was a mainstay on PBS Kids for more than 20 years, first introduced in 1997 and then taken off the air in 2021. The cartoon follows a 4-year-old boy going through his daily life alongside his younger sister Rosie, his parents, and of course his frequent tantrums. Many parents were pretty happy to say goodbye to the cartoon at the time, and now one year later those same parents are going to have to steel themselves because Caillou will be back in the near future. This time on Peacock with a whole new series for preschoolers featuring 52 11-minute-long CGI episodes.

“Caillou will tackle tricky problems and powerful emotions, by imagining himself, his family, and his friends as characters in exciting make-believe adventures based on his favorite toys and books,” Peacock said in a press release about the new series.

Alongside the reboot, which does not yet have a premiere date, are going to be five 44-minute long specials with storylines about Christmas, summer holidays, anti-bullying messages, Halloween, and celebrating family.

Who’s excited? Not these people. “No. No, no, no. NO!!!” one person tweeted about the announcement.

Parents seem rather less than enthused to be re-entering Caillou’s world with him.

One social media user wrote, “Oh come on! I thought the world was safe of this monster,” which feels somewhat harsh.

While many people weren’t entirely thrilled about a Caillou reboot, there were a few outliers. “Are you excited about the Peacock CGI version of Caillou? Me: Yes! This is so marvelous because he's a nice boy and coming back!”

Finally this person was loud and proud in their declaration of love for Caillou, “I’ll love Caillou forever everyone can kick rocks.”

However you might feel about Caillou, he and his family are coming back whether you like it or not.

More Like This
A Guide To Every Dog Breed In 'Bluey'
Exclusive: CoComelon Is Going On A Live Tour Across the U.S.
Netflix Has Lots For Families To Look Forward To This August
10 Of Bandit’s Funniest Dad Lines From 'Bluey'