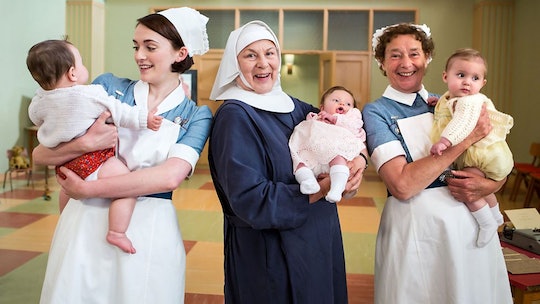 Here’s everything we know so far!

It would be easy enough to dismiss Call the Midwife as a bit of a soapy, lighthearted British series. Between the lighthearted music, the midwives cycling around post-war East End London in the 1950s in their colorful uniforms, and the nuns of Nannatus House, it definitely gives off strong feel-good energy. But under that feel-good energy lies a show that is unafraid to tackle issues that are just as relevant now as they were then. We need more Call the Midwife, and the good news is that Season 12 is already in the works, so here’s everything we know so far.

Any fans who have been watching the BBC series since it first aired in 2012 might remember Nurse Jenny Lee (Jessica Raine), a young and inexperienced nurse who left her comfortable home to live at Nonnatus House and become a midwife to the residents of the economically depressed Poplar community. Nurse Jenny is actually based on real-life midwife Jennifer Worth, who wrote a memoir of her time as an East London midwife and also lived in a convent. “While delivering babies all over the city,” the synopsis for Worth’s memoir reads, “Jenny encounters a colorful cast of women — from the plucky, warm-hearted nuns with whom she lives, to the woman with twenty-four children who can't speak English, to the prostitutes of the city's seedier side.”

While Nurse Jenny left the series after the third season, the sisters of Nonnatus House continue to deliver babies in Poplar along with their nurse assistants. They deal with back alley abortions (abortion was illegal in the UK until 1968), helping sex workers overcome syphilis, miscarriages, domestic abuse, and an ever-evolving landscape in maternal care. By the end of Season 11, which ended in May, a train crash took the lives of two characters and left others injured. Sister Julienne (Jenny Agutter) and Dr. Turner (Stephen McGann) narrowly escaped losing their lives, so it will be interesting to see how the deal with that trauma moving forward.

Season 12 of Call the Midwife has begun filming.

Season 12 of Call the Midwife began production in April, according to a post on the show’s social media channels, and plans to return with a Christmas special for 2022 before the new season begins in 2023. The other good news; Nurse Trixie (Helen George) will return for the Christmas special and the 12th season; George took time away to welcome her second child, daughter Lark, in November 2021. I wonder if she used a midwife for the birth?

Will Season 12 be the last for Call the Midwife?

The show will continue until at least one more season as the BBC announced it had picked up Call the Midwife for a thirteenth season.

How to watch Call the Midwife.

The series is available with PBS Passport, as well as on Amazon Prime Video if you have added Britbox to your subscription. The first 10 seasons are also available to stream right now on Netflix.

It is amazing to see a show so sweet and appealing be so incredibly relevant. Watch Call the Midwife now and get caught up before Season 12 drops in 2023.

More Like This
Yellowstone Season 5 Officially Has A Premiere Date
'Caillou' Is Officially Getting A CGI Reboot Whether People Like It Or Not
The Summer I Turned Pretty Is A Beautiful Coming-Of-Age Story For Teens & Parents
Exclusive: 'Bluey' Celebrates Father's Day With A Look At Bandit's Best Moments