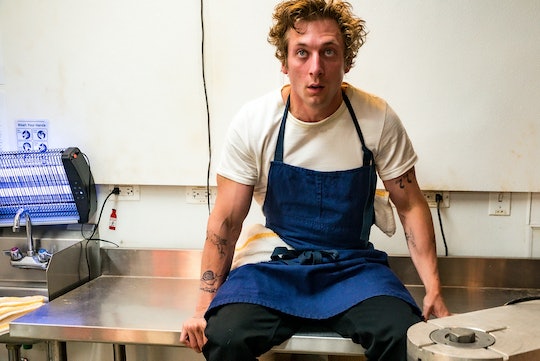 The Bear's Carmy Is Sexy As Hell But Will He Change Diapers?

Sure the mysterious, complicated, hot chef is irresistible. But are you ready for what happens after marriage and kids?

So you’ve seen The Bear and you think, wow oh wow Carmy is what I want. He is so passionate, so different, so genuine. Hot hot hot is what you think, and you’re not wrong. It starts out that way with Carmy-type guys.

If you’ve worked in a restaurant you already know; if you’ve worked in a good restaurant you’ve been part of the little cult where the chef is the wild-eyed genius. He lives in a house with two other guys, his regular-person clothes are always wrinkled, always hanging off him in this way where you can’t look away. He’s tortured — guys, he’s so tortured. Always mussing his own hair while he smokes and stares off into space thinking about how asparagus really needs a comeback or whatever. This guy is serious and sexy and the truest thing in your world when you’re in the restaurant cult and he is your leader.

Good news, you’re going to get him. That whole standoffish thing is a trick and it works.

You watch him for months. The way his back curls while he plates food, his wrist when he sautés vegetables. His hair, it’s always too long, a little dirty. His arms have tattoos that are indecipherable because he moves so quick and you better move quick too. That’s part of the cult, no stopping ever — so busy, this little hive mind, always moving, always carrying dishes and scraping them clean or wiping down tables or folding cutlery into their little napkin beds. You are marrying the ketchups even though he hates when people use ketchup on their food, his food. God he’s so passionate. This is all I want, you think. Him, him, him, you think.

Good news, you’re going to get him. That whole standoffish thing is a trick and it works. Go ahead and tell yourself it won’t work, but it does. And when you get him to notice you it will be all passion and limbs and sex on a mattress in his bedroom with no sheets, a pile of his dirty clothes pushed together as your pillow. His bathroom is unspeakable. But you’re loved up enough to turn a blind eye in the morning to the dried up cake of soap in the grimy shower. The nights feel worth it.

You get married in the restaurant, of course, for the discount. Also you don’t really go anywhere but the restaurant, your life parceled out in the 10-4 shift, the 6-close on a Friday. At your reception you sit in your wedding dress and worry about the back bar. He worries about the chicken dish that is too dry, he knew it would be too dry. This is what you talk about on your 48-hour honeymoon — food, customers, money. That’s as long as you can take away from his new menu, and you don’t talk about it, but it’s all you can afford.

Until you have a baby. And then you’ve joined a new cult, and he’s not part of it. He is still him — you can’t fault him for that — but you are not you. This is what you don’t see when you see Carmy in The Bear. You are only seeing him with his “before” lighting, kitchen lighting, that weird hood range halo that makes him look so bruised and beautiful.

Until you have a baby. And then you’ve joined a new cult, and he’s not part of it. He is still him — you can’t fault him for that — but you are not you.

Now bring him to the park at 8 am on a Saturday morning. Ask him to dole out baggies of Goldfish crackers and push a baby on a swing, a baby who doesn’t really care if his rotating daily special got a write-up in the local paper. A baby who will grow into a toddler and refuse to eat his yucky soup, or cry when he makes his homemade pasta. He can’t seem to impress this baby and he won’t much like it. This baby won’t be indoctrinated and suddenly you might not be either. You’ll wonder if maybe it’s not fair that he stays out for scotch with the kitchen guys until 3 in the morning and then can’t wake up until noon the next day.

His dirty clothes that always hang on him just so might start looking like yet another load of laundry he didn’t do. His unspeakable bathroom, his smoking, his air of distraction, they all take on a different cast. He won’t want to talk to you about Bluey or pacifiers or sleep patterns and you won’t be able to help it, this is what you’ll want to talk about all the time. Instead for him it will just be the food, the 10-4 shift on a Thursday, the dinner crowd on a Tuesday and you’ll think, Oh grow up and this, of course, is when he will stop being the wild-eyed creative genius to you.

You’re out of his cult. And once you’re out, you’ll never go back in. No matter how sexy Carmy might be. I know from experience: I’m out for good.

Jen McGuire is a contributing editor at Romper; her book about single motherhood, Nest, is available now.

More Like This
10 Parenting Lessons We’ve Learned From 'Only Murders in the Building'
Dr. Jill Biden Just Delivered Some Frank, But Powerful, Advice On Motherhood
Reddit Applauds Mom Of Five Who Stood Her Ground & Left Sleeping Dad Behind
I’m A Newly Single Mom. How Do I Get Over My Body Insecurity?