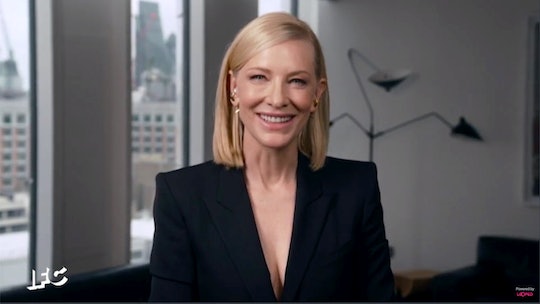 “It felt like some weird kind of cross between The Muppets and Masterclass.”

Parents everywhere really had to pull out all the stops when it came to homeschooling over the past two years, digging deep for any tool in their tool belt that might make it easier. Like if you’re an Academy Award-winning actress like Cate Blanchett, for instance, who found herself not just channelling her enormous acting talents to help her 7-year-old daughter Edith with her homeschooling. She actually had to get into costume as the little girl’s teacher as well.

The Mrs. America actress recently sat down for an interview on the Australian talk show The Project when the subject of homeschooling during lockdown came up. She noted that, like so many of us, she was “amazing for two weeks,” and then things fell apart pretty quickly. Considering Blanchett is mom to four children — 20-year-old son Dashiell, 17-year-old son Roman, and 13-year-old son Ignatius along with little Edith with husband Andrew Upton — it’s no big surprise that homeschooling would feel like a lot of work.

Especially considering her daughter really put her through it. “My older kids were fine, they would self direct. But I had to sort of do my 7-year-old, and I realized that I couldn't even teach her grade 1 math and she sniffed that out after 14 days. I was a dead duck. There was no respect there.”

Cate Blanchett has had it with homeschooling.

Blanchett, who also took up growing vegetables “no one wanted to eat” during lockdown, explained during the interview that she had a solution. “I had to dress up as her teacher, I had to put on her teacher’s voice, and she wouldn’t start the classes until we had a full array of stuffed animals, all of which had the names of people in her class.”

How did it feel to be using her acting skills to such an extent simply to get her daughter to learn? “It felt like some weird kind of cross between The Muppets and Masterclass. It was quite traumatic, actually.”

As a mom of four, the Nightmare Alley actress certainly stays on top of things where her kids are concerned. In 202, Blanchett told Porter magazine that she makes sure to tell her kids to check their sources before sharing anything on social media and be aware of misinformation. Which is perhaps why her older kids were able to self-direct during homeschooling.

Leaving her all the time in the world to prepare her lines as her daughter’s teacher in front of an audience of stuffed animals.