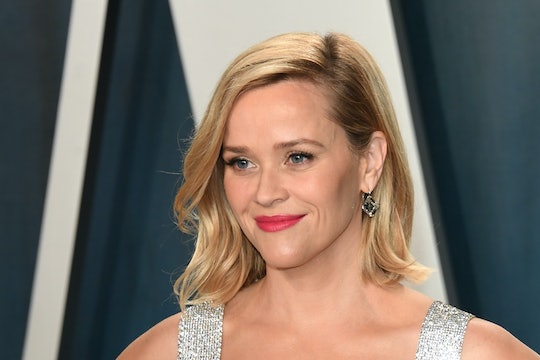 Everyone, meet Grease on Reese.

For years and years, parents have followed the holiday tradition of Elf on the Shelf. A special scout elf arrives at your home all the way from the North Pole to keep a close eye on your little ones, reporting back to Santa each night. This year, however, celebrities are adding their own twist to it. Over the weekend, celebs made hilarious Elf on the Shelf memes of themselves because, c'mon, everyone loves a good play on words.

More Like This
What Parents Should Know After A Mom Influencer’s Kidnapping Allegations Went Viral
People Have Thoughts About A Mom Saying That Parents Are "The Real Teachers"
Sorry Citizen Kane, Paddington 2 Is Now The Top-Rated Film On Rotten Tomatoes
A Quick Explainer On Why People Aren’t Happy With Rachel Hollis

Reese Witherspoon, Jennifer Garner, and more celebrities have added a little Hollywood flare to the festive Elf on the Shelf tradition. It all started when actress Garcelle Beauvais reposted a meme of herself on Instagram last week. In it, she's just casually sitting on Pharrell's shoulder. "You've heard of Elf on a Shelf, now get ready for this..." the meme reads. Since then, fellow celebs have followed suit and joined in on the fun. Here are some of the best:

The actress reposted the photoshopped picture of her on Pharrell's shoulder on Dec. 1 with the "crying while laughing" emoji face in the caption.

Actress Elizabeth Banks was the next to follow suit, having actor Tom Hanks (from his role in Forrest Gump) sit on her shoulder in a photo posted to Instagram on Dec. 4. "I know you have all heard of Elf on the Shelf, but have you heard of...," she captioned the post, citing Beauvais as her inspiration.

Banks also started the "#MyElf" hashtag in the photo, giving a name to this trend.

Reese Witherspoon took it a step further when she put the cast of the 1978 film Grease dancing on her shoulder. "Oh hey Elizabeth Banks!" she captioned the photo. "I see your Hanks-on-Banks and raise you Grease-on-Reese."

Thirteen Reasons Why star Kate Walsh put a photo of Tony Hawk skateboarding on her shoulder for this hilarious pun. "I see your Hanks on Banks, how 'bout a Skate on Kate?," she asked.

Although this did not originate as an Instagram challenge, some celebs helped transform it into one, like Jennifer Garner, who paired herself with actor, Sean Penn. "Hey Reese Witherspoon and Elizabeth Banks, did you challenge me?" she asked. "Because I'm pretty sure you did."

Actress Gal Gadot used her Wonder Woman 1984 co-star, Pedro Pascal, for her Instagram pun. "You know I love a good challenge!" she wrote in the caption of the photo.

"By now you've all heard of Elf on the Shelf...but I bet you've never heard of Pascal-on-Gal."

Actor, Leslie Jordan, paired himself with actor and TV host James Corden, both holding awards. "Hey, Reese Witherspoon, I see your Grease on Reese," he wrote in the caption of the shot. "Elizabeth Banks, I see your Hanks on Banks. All inspired by Garcelle on Pharrell. I raise you a Corden on Jordan. Sorry James Corden."

Mark Ruffalo paired himself with his Avengers co-star Robert Downey Jr. for a very creative play on words using Downey Jr.'s Avengers character, Tony Stark. "Elizabeth Banks, I raise your Hanks on Banks with a Stark on Mark!" he wrote in the caption.

Kyle Maclachlan raised Banks and Ruffalo with his own take on the trend, (Harry) Styles on Kyle.

Jurassic World actress Bryce Dallas Howard used the cast of the 1984 TV series, Miami Vice, for her own play on words. "I raise you all a Miami Vice on Bryce!," she wrote.

Actress Alyssa Milano paired herself with the very hilarious Melissa McCarthy for her take on the meme, tagging Mark Ruffalo. "I raise your Stark on Mark for Melissa on Alyssa," she wrote.

Longtime TV host and news anchor, Katie Couric got in on the fun, using the cast of the 1969 sitcom, The Brady Bunch for her personal version. "I present you with Bradys on Katie," she wrote in the caption.

Actor Gerard Butler got very creative for his take on the meme, photoshopping a picture of Daniel Radcliffe as Harry Potter for his Instagram Photo. "I give you Harry on Gerry!," he wrote in the caption.

OK, so the rhyme might not be completely accurate, but it still works, especially if you say it in Butler's Scottish accent.

Actress Amy Brenneman paired herself with Jamie Lee Curtis to create her pun, Jamie on Amy.

"Perfection," Banks wrote in the comments of the post. "Suddenly I got a craving for Activia yogurt..."

Actress, dancer, and TV personality Julianne Hough used one of Sean Combs (also known as P. Diddy) monikers for her take on the meme — Puff on Hough.

Marcel the Shell on Michelle

Michelle Monaghan used the star from the iconic YouTube video, "Marcel the Shell with Shoes On" for her take on the meme. "Have you ever seen Marcel the Shell on Michelle?," she asked in the caption.

These photos are so random and hilarious, which is the making of a perfect meme. And while celebs helped kick this trend off, families can certainly recreate this for themselves as well.