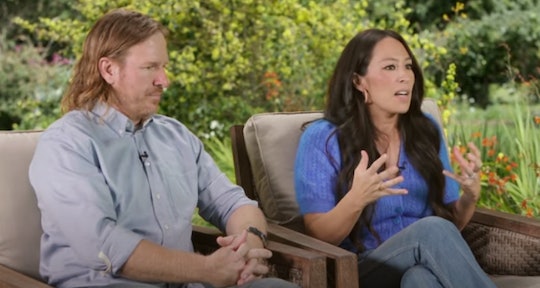 Days after interviewing Meghan Markle and Prince Harry, the queen of media is sitting down with another power couple.

Days after sitting down with Meghan Markle and Prince Harry, Oprah Winfrey will interview Chip and Joanna Gaines. That’s right, the Fixer Upper stars sat down for a chat with the queen of all media for a revealing special airing this weekend.

Hot on the heels of her recent interview with the Duke and Duchess of Sussex that aired on CBS, Winfrey chatted with another power couple about, among other things, living intentionally, for her new show Super Soul Sunday. Chip and Joanna Gaines have had a lot going on in their lives recently, like Chip’s new memoir No Pain, No Gaines coming out, and of course, their new home channel called Magnolia Network that will take the place of the DIY Network. And let’s not forget they’re also busy raising their five kids; sons Drake (16), Duke (12), and Crew (2), and daughters Ella (14), and Emmie Kay (12).

In their wide-ranging chat with Winfrey, the couple open up about why they’re so intentional about their professional choices. And in some ways, intention comes down to their kids.

How To Watch Chip & Joanna’s Interview

The interview will be available to stream on Discovery+ starting on Saturday, March 13. For those who are more podcast people, you can catch the interview on Oprah’s Super Soul podcast on March 17 wherever you get your podcasts.

What Is The Interview About?

In a clip from the interview, Joanna tells Winfrey that when the power couple are approaching a project they consider more than just the bottom line, “We think about the time we have. We have five kids. We have this business. Anything we say yes to, there has to be a meaningful 'why' behind it. It's not just to add to our portfolio or tackle bigger dreams.” To that end, the Gaines have famously prioritized working close to their Waco, Texas home to be there for their children.

In a separate clip from the interview, Winfrey asks the couple about their decision to take time off from their busy careers after ending their show on HGTV in 2018, and Chip opened up about his complicated relationship with fame. As he told Winfrey, according to People, “Really what happened — and was the truth for Jo and I — was it was no big deal for her, but for me to become famous, I lost a part of myself that was really… it was sad. I would say it took me a year or two while I was still filming to try to grapple with what exactly it was that I was losing.”

If anyone can help Chip Gaines comes to grip with his fame, it might be Oprah Winfrey. One of the most famous people on the planet. We’ll just have to wait until March 13 to see what she has to say.