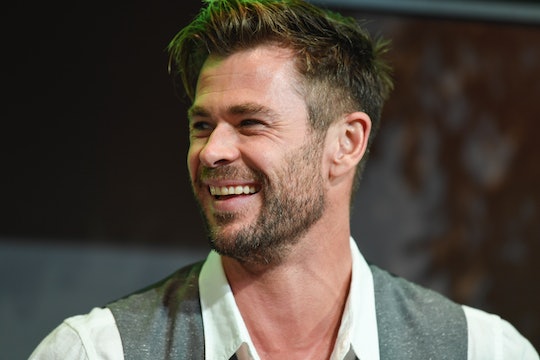 Chris Hemsworth’s Son Told Him He Wants To Be Superman When He Grows Up... Ouch

“Lucky I have two other kids.”

When your father is Thor, the God of Thunder, it’s only natural that you’d probably want to follow in his superhero footsteps, right? Well, that’s not the case for Chris Hemsworth’s mini-me. Indeed, the actor shared that one of his sons wants to be Superman when he grows up, not his Avengers character. Ouch.

The Marvel star revealed the humorous exchange in an Instagram post on Tuesday when he shared that he’d asked one of his twin sons the “age-old question” of what he wants to be when he grows up. Although the 7-year-old was donning a red cape just like his father’s Avengers character in the photo Hemsworth shared on social media, his aspirations are more Kryptonian than Asgardian.

“Dad i wanna be Superman,” Hemsworth said his son told him. “Lucky I have two other kids,” the actor added.

One viewer jokingly commented, “Whack him with ya [hammer] and then see what he says.” Fellow Avengers co-star, Josh Brolin, who portrayed Thanos, commented, “Hahahaha.”

Jason Momoa, who starred in Aquaman, commented that he’s encountered a similar dilemma with his son. “yeah wolf wanted to be batman,” he wrote.

Hemsworth didn’t share which son made the cute comment, but as he mentioned he has two more! The actor is the father of twin boys, 7-year-old Tristan and Sasha, and a 9-year-old daughter named India Rose with wife Elsa Pataky.

Hemsworth is currently filming the new Thor movie and shared with People that he brings his kids to set from time to time. “They come to set occasionally and sort of hand-brake whatever production was occurring at the time,” he told People in April. Even fun perks like that can’t seem to sway a determined kid from their dreams.

Who knows, kids change their minds all the time! Nonetheless, no matter what superhero they choose to be, the Hemsworth boys will always have bragging rights that their dad is Thor.