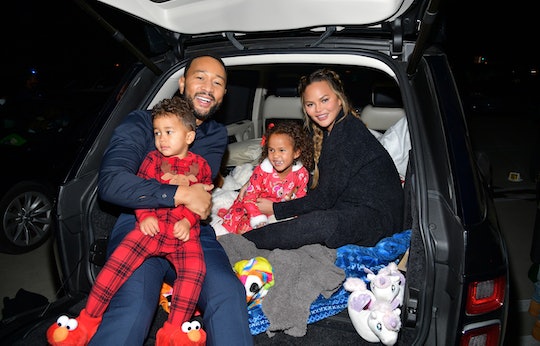 Picture this: You're with your family trying to snap that perfect, holiday photo, but your little one is simply not feeling it. It's a situation all parents can relate to, of course, including Chrissy Teigen who shared her hilarious holiday family photo fail. Over the weekend, the Craving cookbook author and her husband John Legend got together to take some jolly pictures, but their son, Miles, was not feeling, well, jolly.

In a tweet posted on Dec. 5, Teigen shared a behind-the-scenes look at her 2-year-old son having a bit of a meltdown and trying to crawl away from his mother during a professional photo shoot. "Family shoot went...right as I thought it would, actually," she joked.

But in another photo, taken by Teigen on her phone, Miles managed to pose with his arm folded as looked off to side like the most dapper toddler there ever was. "Then this happened!!! On my PHONE of course," she captioned that photo.

Social media went abuzz on the outtakes, especially parents who could relate to this all too common scenario. "I feel like this is always the case! Every photo was either my kid wanting to go find an acorn, my wife squinting into the sun, or me trying to get their attention," one follower wrote.

Others commented on the toddler's striking resemblance to his "Ordinary People" father. "Honey I shrunk myself Starring John Legend," another joked.

Beyond trying to capture a perfect family photo, Teigen recently shared another relatable post about taking time to slow down and treasuring the little "moments" with her kids. "One thing I have gotten very good at is knowing every single moment they want you to pause and pay attention to them is very important to them so you just gotta make it a moment because it’s just a moment but it’s THEIR MOMENT, you know?" she captioned a photo of her with her 4-year-old daughter Luna. "Give them a moment because it’s just a moment but it’s important to them. Right? I dunno. You get it."

And lucky for us, we got to see one of Miles more hilarious moments. Happy holidays, indeed!