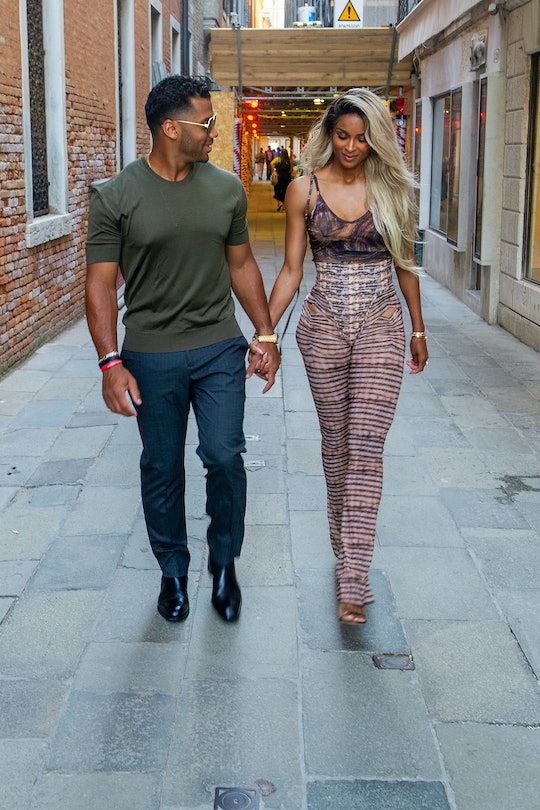 Oh, to be rich, beautiful, stylish, and famous! Ciara and Russell Wilson are basically royalty so it makes sense that the “Level Up” singer and the Seattle Seahawks quarterback would celebrate their five-year anniversary with a romantic getaway in Venice, Italy. And while they were there, the couple recreated a picture of the late Princess Diana and her then-husband, Prince Charles, leaving a restaurant in 1985.

In a photo Ciara posted on Instagram on July 6, the “1, 2 Step” singer posed her hands in the same manner as the late Princess of Wales did decades ago as she and Wilson are flanked by two men exiting the same restaurant building.

In April 1985, Princess Diana and Prince Charles were photographed at the same Venice restaurant. (In the fourth photo of Ciara’s Instagram post, you can see the photo of Diana and Charles.) “You Always Make Me Feel Like A Princess,” the singer captioned the images, referring to her husband of five years.

Several of her fans caught the Diana-nostalgia. “Well Princess is your middle name,” one person commented. Another wrote, “Wait I love that you recreated that picture so much.”

Wilson certainly did deliver on the whole royal princess experience for his wife. While there, the couple took gondola rides, were serenaded by a piano accordion player, and had a romantic, rose-filled, candlelight dinner in the Italian countryside.

“5 years of Love as husband & wife, mom & dad, best friends, business partners, and more,” Wilson captioned his Instagram post celebrating their union. “You leave me speechless. There are no words that could ever describe my love for you. Only Heaven knows. 5 years & Forever to go! Andiamo.”

And if that’s not enough to give you lovey-dovey vibes, the “Rooted” singer also posted a cute Instagram video of the two of them telling one another how much they love each other in Italian.

Ciara and Russell Wilson tied the knot in 2016 in a breathtaking, English countryside wedding. The couple have three children together, Sienna, 4, Win, 1, and Future Zahir, 7, who the singer shares with her ex, Future. And after all these years, it’s clear their love for one another couldn’t be stronger. As Wilson said, they’ve got forever to go!