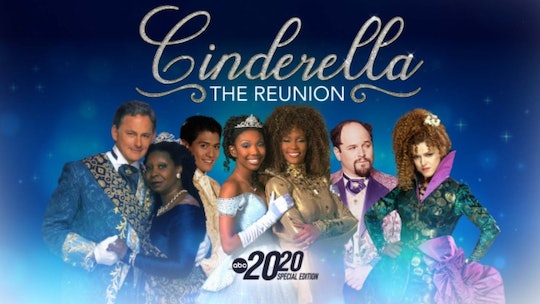 The one-hour special is now streaming on Hulu.

Impossible! It’s been 25 years since Brandy, Whitney Houston, Whoopi Goldberg, and others delighted and enchanted us in Rodgers & Hammerstein’s Cinderella. The 1997 musical television movie was full of historic firsts and a new reunion special, Cinderella: The Reunion, A Special Edition of 20/20, celebrated everything about the film. So here’s everything you need to know to watch the previously aired special now.

“We’re delighted that the 25th anniversary of this landmark incarnation of ‘Rodgers & Hammerstein’s Cinderella’ is being celebrated on its original network,” Imogen Lloyd Webber, SVP at Concord Theatricals, on behalf of The Rodgers & Hammerstein Organization, said in a statement to Deadline. “Rodgers & Hammerstein’s unforgettable score is truly timeless — still enchanting listeners 80 years after their partnership began and 65 years since their ‘Cinderella’ first charmed the largest audience in television history.”

Can you stream the reunion special?

Cinderella: The Reunion, A Special Edition of 20/20 premiered on Aug. 23 on ABC. If you missed the TV broadcast, no worries — you can stream it on Hulu now.

Want to watch the 1997 TV movie? Rodgers & Hammerstein’s Cinderella is available to stream on Disney+.

The actors shared some behind-the-scenes secrets.

During the reunion, Whoopi Goldberg shared an inspirational secret about the creation of her character, Queen Constantina. The View co-host revealed she used the jewelry of a celebrity diamond jewelry maker, Harry Winston. “I love Harry Winston,” Goldberg said. “I said, ‘Listen, I'm playing this queen and I would like to have some jewels. Will you guys loan us some jewels?' They said, ‘We'll pick out our most royal jewels.' And so that's what they did.”

Actor Jason Alexander, who played King Lionel, added there were armed guards on the set to protect the jewels. “If anybody approached or Whoopi made a mistake and tried to leave the set with that jewelry on, someone would have been shot,” he joked.

Brandy talked about the beautiful impact of being a Black princess.

Becoming the first Black actor to portray Cinderella onscreen is a big deal! Brandy spoke on the power and influence of her role and the impact it continues to have on Black girls. “I knew that this was so great for the world to see, especially Black people,” Brandy said in the special. “She represented a culture that is beautiful, and I just so appreciated that because that was so much a part of what I wanted to bring to Cinderella.”

She added, “That movie changed the way Black little girls believed in themselves. I hear to this day, ‘I believe I can be a princess now because of you.’”

Rodgers & Hammerstein’s Cinderella is an iconic and groundbreaking movie.

The musical television movie marked many firsts, including the first Black actress to portray Cinderella on screen, making Brandy, who was handpicked for the role, the first Black Disney princess. The late, great Houston also made history as the first Black fairy godmother.

Brandy and Houston shared a close bond until the iconic singer’s tragic passing in 2012. “What I love about this film, Rodgers & Hammerstein's Cinderella, is that we're gonna see her in this enchanting light,” Brandy told Entertainment Tonight in a February 2021 interview. “This is how we need to see her...her voice, her talent, her vision for, not just me, but this entire cast and bringing this whole film to life, it's unforgettable.”

Also its diversity in its casting spoke volumes. As one person summed it up and tweeted, “the best and most iconic version of cinderella ever. a black Cinderella with a black fairy godmother, an Asian prince, an interracial couple + interracial family, a diverse cast, memorable and iconic bops in this movie executive produced by Whitney herself. they did THAT!”

And let’s not forget the memorable songs such as “Impossible,” “In My Own Little Corner,” “A Lovely Night,” and “Do I Love You Because You’re Beautiful?”

There’s so much to celebrate in honor of the movie’s 25th anniversary and ABC’s reunion special is a great place to start.

This article was originally published on Aug. 22, 2022