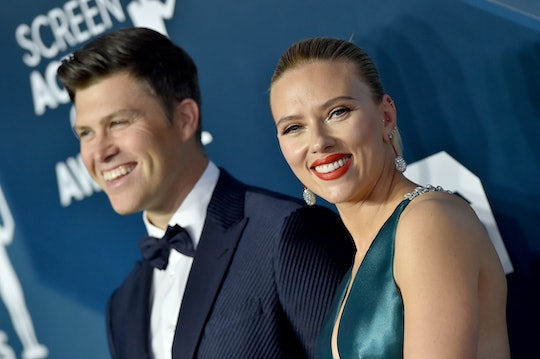 What do you do when you don’t necessarily like the name your child has chosen for their baby? If you’re Colin Jost’s mom, you hang on. You don’t say that you don’t like the name, you just hint around at other suggestions that you think might be better. For days. Because Jost’s mom was not into his baby’s name, Cosmo, when she first heard it after wife Scarlett Johansson gave birth earlier this year. And she did her level best to get him to change his mind. Credit to her for perseverance.

The Black Widow star gave birth to her second child, a baby boy named Cosmo, on Aug. 18. This made her 7-year-old daughter Rose Dorothy, who she shares with ex-husband Romain Dauriac, a big sister. Cosmo’s birth came one day after his father, Saturday Night Live star Jost, told the world they were expecting. Now that Cosmo has arrived safely and everyone loves him very much, per his dad’s Instagram announcement, it’s time for his family to get accustomed to the new little guy. Even Jost’s mom, who apparently needs some help wrapping her head around his name. And was happy to suggest alternatives, Jost told Seth Meyers on Late Night with Seth Meyers.

“My mom, I would say, was slightly thrown by it and didn't quite understand it. I don't know if she thought it was kind of like a hippie thing?"

She also wanted to know if the name choice was written in stone, calling after a few days to ask the couple, “‘And, now, is it final? Like, did you submit the birth certificate?' And we're like, 'Oh, yeah, we did that at the hospital,'" Jost told Meyers. "She was like 'Oh okay, interesting. Because I was reading that there's also a name Cosimo with an "I" so that could also be an option. Maybe you call him Cosimo, that's his real name, but then you can call him still Cosmo.’”

Jost’s mom might be surprised to find that Cosmo is actually trending upwards in popular baby names, per Nameberry, so her grandson might see other little Cosmos on the playground. And to her credit, she did eventually warm to the name. Jost told Meyers that his mom called him to tell him, “I met someone. They said their uncle’s name is Cosmo so it is okay.”