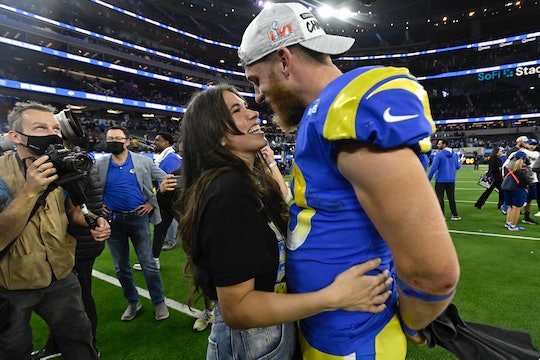 “Behind every good man is a great woman... you lift up, heal, and inspire.”

Los Angeles Rams wide receiver Cooper Kupp is an All-American on the field and off the field. The 28-year-old is husband to Anna Marie Kupp and father to their sons, Cooper, 3, and Cypress, 1.

Kupp comes from a family of football players. His father, Craig Kupp, is a former NFL quarterback for the Dallas Cowboys and Arizona Cardinals, and his grandfather, Jake Kupp, is a Hall of Famer, and a Pro Bowl guard for the New Orleans Saints.

Faith is at the center of the Kupp family. “It’s part of who we are,” Kupp, who is a devout Christian, told The Yakima Herald. “Our relationship with Jesus is the center of our life.”

It was his faith that led him to his wife.

Cooper and Anna met at a track meet when they were seniors in high school. Cooper told ESPN when he first met Anna he knew she was the one.

“I knew that she was the one that I wanted to marry when we had first met back in high school," Kupp said. “I told my mom the day I met her, 'I'm going to marry this girl.”

And indeed he did. The two tied the knot in June 2015 while they were still in college.

“A lot of people ask, 'Why did you guys get married so young? Didn't you feel you were missing out?'“ Anna told ESPN. "And you're telling them, 'No, we actually think the opposite.’ We feel so lucky to have found someone that we love and cherish so much so early.”

Anna was also an athlete and transferred to join Kupp

As a matter of fact, Anna attended the University of Arkansas and competed as as a heptathlete. The couple dated long-distance for a little while before Anna finally transferred to Eastern Washington University to join Kupp.

She lost about two years of course credits from transferring, which prompted her to work double time.

Anna is his rock

Ask anyone close to the couple and they would tell you Kupp’s biggest supporter in life is his wife. While in school, she and Kupp would watch films, do Crossfit workouts and run laps together.

“I don't think there's a Cooper without what Anna's done for him,” Kupp’s high school friend, Austin Wagner told ESPN. “She's a person that really expects a lot out of the people around her and has kind of a high threshold for excellence.”

Anna was also a big supporter of the whole Eastern Washington football game. On game days, she would make goodie bags with cookies or Kupp would write personal handwritten notes to tape on each of the player’s lockers.

When Kupp became a member of the Rams in 2017, she celebrated her husband on her Instagram page. “#18,” she posted with a boomerang of them kissing with his new Rams jersey. Five years later, she celebrated another milestone of her husband’s when the team beat the 49ers, 20-17, and solidified their place in Super Bowl LVI.

“This moment. These moments!!!,” she posted with a video of her running on the field to congratulate him. “Thanking God for every one of them. We have prayed for a season to glorify our Savior Jesus Christ and you are doing just that my lovey @cooperkupp. SURREAL!!”

Kupp later followed up with his own post praising his wife and her support of him over the years.

“This is LOVE! Win together, lose together,” he captioned his Instagram post. “Can't put words to how thankful I am for you, @annamariekupp. You are as much a part of this as anyone!! Behind every good man is a great woman... you lift up, heal, and inspire when I am down, hurting, and discouraged. (I tell you this in TRUTH: there is great power in the hands of those that love you!!) Enjoy this journey my love, because I have cherished every moment alongside you!”

Between his wife and two boys, Kupp has all of the love and support he needs to bring him a victory.

More Like This
Bradley Cooper Jokes He Watches 'The Hangover' With His Daughter "Every Friday Night"
Jennifer Lopez Shared A Super Romantic Video Of Ben Affleck To Celebrate Father’s Day
Ireland Baldwin Shares Her Abortion Story In An Emotional TikTok
Meghan Markle Calls On Men "To Be Vocal" In The Aftermath Of Roe v. Wade Ending