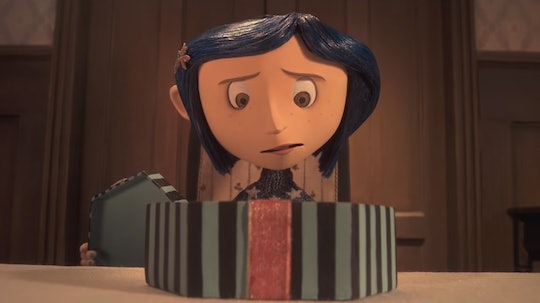 Coraline Is A Classic Halloween Movie, But May Be Too Spooky For Little Kids

Here’s what parents need to know about this whimsical gothic fairy tale.

In the 13 years since it was initially released, Coraline has entered the pantheon of creepy-fun kids’ movies... but what, exactly, is the ratio of creepy to fun? Is this stop-motion, modern-day classic suitable spooky season viewing for, say, a kindergartener? A middle schooler? What age is Coraline appropriate for? Obviously, as is often the case with media, so much depends on the child (and parents) in question, so here’s what you need to know...

Common Sense Media, a website that helps parents and caregivers make more informed decisions about media, cites violence and scariness as the main reason for its recommendation that this movie is appropriate for kids 10 and older. (Parent and kid reviewers alike generally seem to agree with this assessment.) It also highlights the fact that the movie is also full of positive messages and has positive role models for younger viewers. Some light “spicy” language is mainly limited to insults (“jerkwad” and “idiot”) rather than actual swear words. Death (including ghostly children), dismemberment (removing eyes and replacing them with buttons), and disturbing visuals (Coraline’s “Other Mother” or the “Beldam”, and the world she has created, become increasingly grotesque as time wears on.)

Coraline is the story of a girl who stumbles in a world that’s too good to be true.

Coraline Jones is an only child whose parents have moved from Michigan to Oregon. The pair are collaborating on a work deadline, leaving little time to help 11-year-old Coraline acclimate to her new home — the Pink Palace, an old stately home turned into a small, eccentric apartment complex, with residents to match. She thinks it’s pretty weird when the landlord’s grandson presents her with a doll that looks just like her, down to her clothing, which he says he found in his grandmother’s trunk. It’s weirder still when the doll apparently guides her to a small door hidden in her living room wall.

One night, Coraline opens the door to find a world parallel to her own — same house, same residents, same rooms — but better. Everything is prettier, more fun, more whimsical. Her parents are entirely devoted to her and always smiling. They’re not her father and mother, they explain, they’re her Other Mother and Other Father. There’s just one thing that’s off: everyone in this new world has black buttons where their eyes should be.

When Coraline’s Other Mother offers to let Coraline stay there forever, there’s just one catch: they need the girls eyes to be replaced with buttons as well.

If that didn’t make it clear that this Other World was somewhat less than wholesome, the ghostly children who warn Coraline of the evil “The Beldam” did. The longer Coraline spends in this world, the more apparent it becomes that the first impression was not accurate. Slowly, the wonder erodes into horror. The question is, can she escape it now that she’s opened the door...?

The movie is based on the (even creepier) book of the same name by Neil Gaiman.

Gaiman, author of other beloved stories such as The Sandman, American Gods, and The Graveyard Book is known for a style that intertwines folklore, fairy tale, and horror. He wrote the novella, Coraline, in 2002, which won numerous awards including Hugo and Nebula Awards for Best Novella, and the 2002 Bram Stoker Award for Best Work for Young Readers. But it was a project he’d actually begun writing in the early ‘90s, when he was inspired by scary stories his 4-year-old , Holly, told him. (They were stories about a little girl who had escape a witch pretending to be her mother, and the dead children in the basement who had to help her escape... not gonna lie, this kid sounds rad.) Wanting to encourage her creativity, he looked for scary stories for kids but found the bookstores and libraries lacking, so he wrote one himself. (What a good dad.)

Clearly this story was a good fit for Gaiman’s kids, but what about yours? Allow me to share a quick anecdote: this was my daughter’s favorite movie as a toddler, but she was (and remains) a very difficult to frighten child with a penchant for the macabre. My son, despite being older, didn’t watch it until he was quite a bit older and even then he didn’t want to finish it because he was too freaked out.

So... it depends! While some young viewers may handle this just fine (and even love it) others might get nightmares. So this ultimately boils down to what you think your child can handle (and what you want to expose them to).