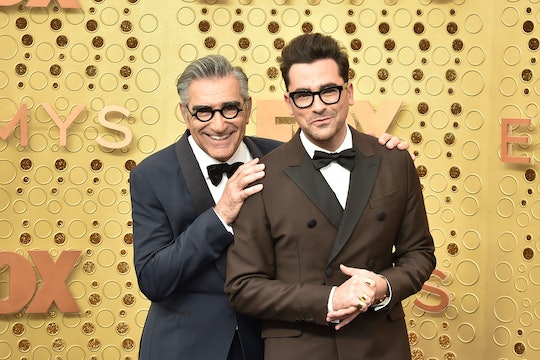 For the millions of people who watched Schitt's Creek, the Canadian sitcom that managed to sweep the 2020 Emmys, the cast's relationship off-camera was just as fascinating as on-camera. A father and son playing a father and son, working together. Day in, day out. How would that even be possible? Who could work with their dad like that? Well, David Rose could, that's who. During a recent interview, Dan Levy talked about his dad Eugene Levy and shared the good news; he is as wonderful a father as so many of us secretly hoped. In fact, Dan believes that his father's constant, unwavering belief in him is the "support that every father needs to give their son." Hear, hear.

The Emmy-winning pair sat down for an interview with Entertainment Weekly after being named "Entertainers of the Year" by the magazine. When Eugene Levy's son Dan, who was raised in Toronto with his sister Sarah (Twyla Sands on Schitt's Creek), was asked about his relationship with his dad, he was surprisingly sentimental. The younger Levy said that, growing up, "he always knew that love was there" from his parents.

"I’ve never had to prove myself. I've never had to explain myself and that, fundamentally, is the support that every father needs to give their son," he added. "Particularly where the son is a gay or queer person, because that relationship is crucial. And I think for a lot of people, they don't get that support from their fathers. I’m grateful."

In the same interview with Entertainment Weekly, the proud son went on to share what he learned from his dad during the seven years of filming Schitt's Creek. "Just the way that he is with people, the way that he operates on set, the level of care and respect, it's quite remarkable."

It's the sort of behavior that resonates with people looking for a father figure. Jason Biggs, who played Eugene Levy's son in the American Pie series, commented on an Instagram post of the father and son duo. "I mean, I know he’s not my real dad, he’s YOUR real dad, but still.. I can’t help but be a little jealous? Good thing you two are the best comedy/fashion/father-son pairing and deserve every accolade you’re getting. Makes it easier to stomach," Biggs wrote.

As for the man himself, the father whose son credits him with offering unconditional love and support, who never expected him to be anything other than exactly who he was, what is his secret to fostering creativity in his kids? Stepping back, giving space, as he explained in a January interview with Entertainment Tonight. "We started in the beginning kind of together and I always felt I had to mentor him in the beginning and as soon as I knew the best thing you can do is just take a step back and give him a little space and let him do his thing, that was a light bulb moment actually you know for me," he shared with the outlet. Now I wish he was my dad, too.