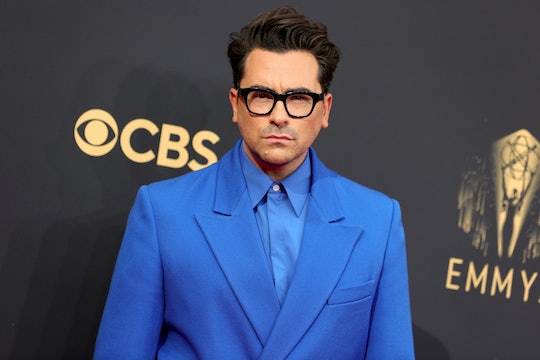 Dan Levy Is Hosting A Cooking Competition Show About Brunch

Here’s a little something you might not have known about Schitt’s Creek co-creator and everyone’s darling Dan Levy — he loves to eat; he’s a big foodie. And so of course this means that the actor will be hosting a cooking series on HBO Max. A cooking competition series about a meal nearly as beloved as Schitt’s Creek itself — brunch.

HBO Max announced on Monday that Levy had been slotted to host a new cooking competition series called The Big Brunch, which Variety notes is expected to launch in 2022. The series was created by Levy himself and will highlight unknown culinary talents from around the country who are all well-versed in creating their own personal takes on brunch menus. There will be a cash prize awarded to the winner of the series along with sharing the personal stories of each chef.

“Everybody has a friend, a family member, or a co-worker that is extraordinary at what they do, they just need a leg up so that their talents can be appreciated on a larger scale,” Levy said in a statement shared by Variety. “Thanks to an almost obsessive love of food, I’ve been lucky enough to come across many of those people in the culinary world — friends working out of cafes or food trucks, revolutionizing the menus at local diners — those special humans who create communities around their cooking, hoping to take their skills to the next level. I created this show for them, the local culinary heroes of America who deserve a spotlight. That, and who doesn’t want to watch maple syrup being poured slowly over a golden stack of perfectly cooked, creme brûlée inspired French toast?”

The search for chefs to compete on The Big Brunch has already begun, according to Levy’s recent casting call on Twitter, where he asked people to consider chefs in their community “who just need a leg up or a big break.” This includes home chefs too, by the way.

Dan Levy is looking for a big brunch.

This is not Levy’s first foray into the world of hosting a competitive cooking series. Levy was the host of The Great Canadian Baking Show for the first two seasons despite admitting that he knows absolutely nothing about baking. He is, however, excellent at eating baked goods. “I’m very good at eating baked goods, yes,” he told CBC in 2017.

He also gave a bit of a clue about what he loves to see in cooking competition shows. “What I find so inspiring about this show is that it’s not about tearing each other down, it’s about people wanting each other to succeed because at the end of the day you’re not competing against someone else. You’re competing against yourself.”

If this doesn’t have you wanting to watch The Big Brunch when it premieres on HBO Max, I don’t know what will.

More Like This
Snooki Hints That A Sunday Dinner With All The Jersey Shore Kids Is In The Works
Khloé Kardashian Reveals Tristan Thompson Proposed To Her Last Year & Why She Said No
Khloé Kardashian Shares First Look At Her Son & His Birth
Kim Kardashian Stars In Hilarious House Of The Dragon Parody, The Targashians