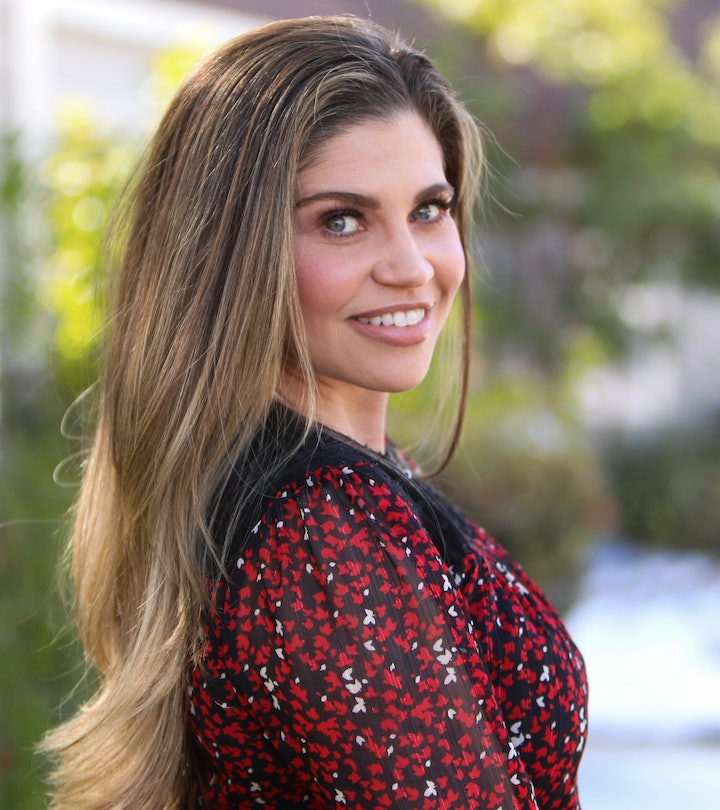 “I think it's such an important lesson for teenagers and for me, even now as an adult.”

The first clue that actress Danielle Fishel has more than a little bit in common with Topanga Lawrence, the quirky overachiever she played on Boy Meets World, is the fact that even though it’s 7 a.m. on the West Coast, she is to-the-minute punctual to a recent Zoom call with Romper. “Sorry, though, you get pajamas,” she jokes, then holds up her scrunchie-clad wrist. But that’s #MomLife: getting it done in PJs and messy buns. Since her Topanga days, she became a mom to sons Adler, 2, and Keaton, 8 months, and has had the chance to reflect on those years, including what she would do differently, and what she wants all teenagers to know.

Though many of us likely think of her as her teenage counterpart, Fishel turned 40 last year, making her the same age as that most iconic baby item: Onesies. She recently teamed up with Gerber Childrenwear, the inventor of the garment, to celebrate the anniversary with a special “decades” Onesies pack with designs that harken to the ‘80s, ‘90s, ‘00s, and ‘10s. The ‘90s one is, what else, “Baby Meets World” (and yes, of course Keaton has worn it). Fishel is even doing a Onesies giveaway on her Instagram page through April 28. “I love to give people things; free stuff's the best!” she laughs. “Especially Onesies; there isn't a single mom that doesn't need or want Onesies.”

“Any time in my life, both personally and professionally where I have felt like I'm starting to take something for granted, I remind myself, ‘You did this with the end of Boy Meets World.’”

She’s happy to “bring nostalgia to life” and not only with a cute baby clothes; she’s proud to have played Topanga and to continue to “be Topanga” today. In fact, she says there was only one time she resented the role: her last couple seasons of Boy Meets World, which ran from 1993 to 2000.

“I had been in school full-time, working full-time. I started to feel like I just want my life back,” she recalls. But, she says, she took for granted so much simply because she didn’t really know any better: the overwhelming success of the show and the love and respect that was on set, an environment that is far from a given in Hollywood.

“The last several years, I feel like were tainted by my own feeling of wanting it to be over. And now, I would do anything to go back and have those moments back,” she says. “Any time in my life, both personally and professionally where I have felt like I'm starting to take something for granted, I remind myself, ‘You did this with the end of Boy Meets World. Don't do it now, because one day you're going to look back and you're going to wish you had those moments back.’ I think it's such an important lesson for teenagers and for me, even now as an adult.”

Fortunately, the love that was on set continues to this day. Fishel is in a group text with her former castmates, and they’ll regularly get together to hang out. Will Friedel tends to make plans, she’s the one who gets them rolling, and Rider Strong is “the closer” who eventually sets them. (Matthew Lawrence is the late-replier… every group has one.) But she has a theory as to why she and Strong are the most organized.

“Rider and I are the only two who have [young] kids, so we jump into schedule mode,” she says. When you have kids everything has to be somewhat organized because otherwise it's just pure chaos.”

Last August, Fishel discovered a new level of chaos when she gave birth to Keaton. “I was so naive!” she playfully moans. “You'd think I would've learned that with my first — all these pie in the sky ideas you had when you were pregnant that get thrown out the window. So why was I so naive to think, ‘How big of a difference could it be to have two? You're already busy all the time.’”

While it might have been a shaky start — Adler wasn’t sure about this newcomer — big brother eventually learned to share his toys and get along. Keaton, on the other hand, has been unwavering in his adoration of Adler and laughs at everything he does.

For her part, Fishel, an admitted perfectionist, has learned to lean into the fact that she’s never going to be a perfect parent (because they don’t exist) and using her shortcomings as an opportunity to model an important life lesson to her boys.

“As a parent, I’m constantly being shown a mirror of my own shortcomings,” she says. “Instead of fighting against them and beating yourself up every time you show a flaw, just use that as a way of showing your kids what it looks like to be a person who makes mistakes, and you can apologize. Your children are never too young for you to apologize to them. Then, hopefully they’ll be self-aware enough to recognize their own mistakes.”

Since 2016, Fishel has mostly been behind the camera. She’s been a director for Disney Channel shows including Sydney to the Max, Raven’s Home, and Girl Meets World… in other words, she’s running the kind of sets she grew up on for a new generation of actors. “I try to bring that fun and that energy and that enthusiasm that I had as a teenager to the work that I do now,” she says, “because I work with those teenagers that I once was.”

Being on set, she says, has been vital not only as an artist but as a mom, though the realization took time and perspective. Going back after her first child brought the kind of guilt, second guessing, and self doubt many new parents feel about returning to their career. “But when I went back to work with Keaton,” she recalls, “I was so happy to realize that I had learned from that previous experience with Adler: there was no doubt in my mind that for me work was a necessity.”

It all comes down to living her truth, not only for her own happiness but because her kids would figure it out if she didn’t. “I think they can smell a lie,” she says definitively. “If staying at home for you means giving up such a huge part of who you are, and it's just going to eat away at you, they're going to know that.”

“I want my kids to look at the way I lived my life and say, ‘Mistakes, flaws, whatever. It was fine. She was pursuing her authentic self and pursuing what was good for her and for the greater good of the family. And I want to emulate that, too.’”