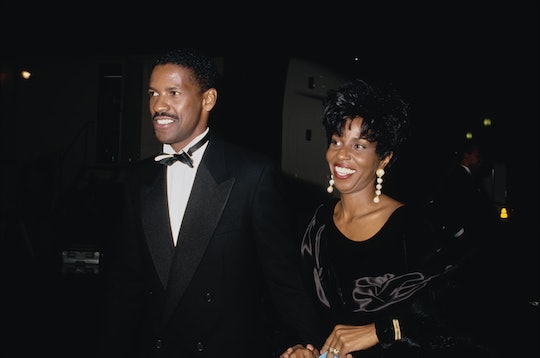 Denzel Washington & His Wife Pauletta Have A Talented Family

The Oscar-nominated actor is a proud dad of four.

Denzel Washington has staying power. He is all about taking traditions and making them his own. Case in point, his Oscar-nominated turn as MacBeth in The Tragedy of MacBeth. A role that has been played countless times through the centuries, but as ever, Washington turned the role into something singularly his own. How does he do it? By playing the long game. Just as he’s always done, both in Hollywood and in his family life. So here’s everything you need to know about the actor’s loving wife, children, and family.

Fellow actor Pauletta Pearson met Denzel Washington when they were both acting on the set of a TV movie called Wilma in 1977. The two began dating shortly after, and apparently things must have gone quite well. Until his proposal, that is.

Before the couple eventually married in 1983, Washington proposed not once, not twice, but three times before Pearson said yes. The two discussed it in an Access Hollywood interview in 2013, where Washington asked his wife, "Why was it twice? Why would I have to ask again?" Pearson replied, "Because I said no!" Clearly Washington was invested in marrying her. The third time was the charm, and the two married in June 1983.

He credits his wife Pauletta with giving their kids a “normal life.”

In an August 2020 with Reader’s Digest, Washington gave credit to Pauletta for giving their kids a “normal life.” “My wife’s done a great job. She’s been the consistent one,” he said. He also noted that they didn’t really have a parenting style as a couple, “If you have kids, you know there is no style! It’s a hybrid. It’s what my wife and I learned from our parents, and applying religious instruction, discipline, athletic activity and academic excellence whenever possible.”

The couple welcomed their oldest child, John David Washington, in 1984. John David has grown up to be an actor in his own right, with roles in movies like BlackkKlansman, Tenet, and even co-starring alongside his dad in The Book Of Eli in 2010. John David opened up about following in his parents’ footsteps to People, “I just wanted to prove to myself that I could do it," the actor said. "I'll never forget how he expressed how proud he was of me. That was a great moment for me."

As for his mom, John David called her “the most consistent person in my life.”

Their daughter Katia works in cinematography.

In 1987, Denzel and Pauletta welcomed their first daughter Katia. Like her older brother, she works in the entertainment industry, although Katia prefers to work behind the scenes. She has been a production assistant for Quentin Tarantino, as well as working on two of her dad’s films, The Equalizer and Fences.

Their son Malcolm was a basketball player at the University of Pennsylvania.

Pauletta and Denzel welcomed twins Malcolm and Olivia in 1991, instantly making them a family of six. After high school Malcolm went on to graduate from the University of Pennsylvania with a degree in film studies and then the AFI Conservatory, a graduate film school. He also played basketball, because apparently the talent is endless in this family. Malcolm seems like another one to watch.

Their daughter Olivia is also an actor.

Finally, youngest daughter Olivia Washington has also decided to go into acting. She has had some small parts in The Butler, The Little Things, and her dad’s most recent movie, The Tragedy of MacBeth. And her dad has no problem giving her a shoutout, as he did in a January 2021 interview when she said, “Watch out for his sister. His sister’s a great actor: Olivia Washington.”

It seems great actors are everywhere in the Washington family.

More Like This
Ray Liotta Has Died At 67. Not Only Was He An Iconic Actor, He Was A Proud Dad.
24 Photos Of Princess Charlotte Making Silly & Cute Faces
Take An Exclusive Look At A Brand New, Four-Part Peppa Pig Special
American Girl Just Released A Fun New Mystery Podcast Series Featuring Molly