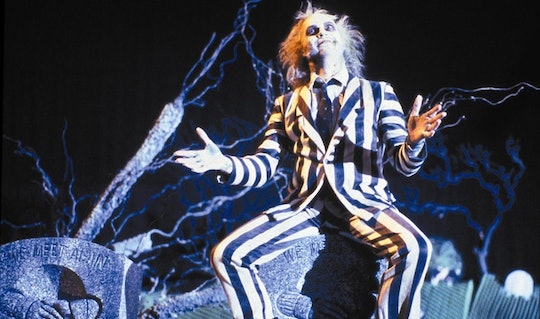 You Probably Never Noticed This Detail In Beetlejuice

But, really, what happened to the Maitlands?

There are plenty of reasons to rewatch Beetlejuice any time of the year. It’s easy to find yourself drawn to the awesome weirdness of one of Tim Burton’s earliest classics. But even if you’ve seen it more times than most, there might be one detail you never noticed about Beetlejuice that could change things for you the next time you check in with your favorite bio exorcist. OK, maybe you’ll still love it for the dark comedy that it is, but some things just can’t be unseen, or unnoticed, once you know about them.

Beetlejuice Has Some Plot Holes

The 1988 movie still holds weight today as a Halloween staple, so much so that you kind of appreciate the outlandish characters and look past the special effects that verge on claymation. In fact, for most fans, that’s why they love it. But the biggest plot point of the movie is the deceased couple, Barbara and Adam Maitland, played by Geena Davis and a much younger and (dare I say) hunky Alec Baldwin, respectively. The way they died, though raises some questions. Their death happened — spoiler alert! — when their car crashed into the side of a bridge and fell into the watery depths of the river below.

But once you realize that the car windows in Beetlejuice were actually open, you can’t help but rewind the scene over and over to try and figure out just how the couple died.

The Maitlands Could Have Had Time To Escape

Really, in addition to the windows being open, which would enable both of them to climb out of the car as it sank, there’s the river itself. The Maitlands’ car didn’t fall into some huge ravine that could potentially be 30 feet deep. Instead, it fell into a pretty narrow river that looks relatively shallow, given its short distance from one embankment to the other.

But They Could Have Died From Other Causes

Now, to be fair, there are a couple of other possible causes of Barbara and Adam’s deaths that may have resulted from the car accident. When they returned to their house, dripping wet, Adam asked, "How’s your arm?" to which Barbara replied, "I don’t know, it feels frozen." This leads me to believe that maybe the water was so cold that, while somehow trapped in their car despite the windows being open, the Maitlands could have also succumbed to hypothermia.

Since their seatbelts were indeed on, they may have had a difficult time freeing themselves before drowning. There’s also the possibility that the Beetlejuice couple died from head trauma, but later in the movie the realtor’s daughter confirms to Lydia that the cause of their deaths was, in fact, drowning. Let’s all agree that those open windows are a huge plot hole.

Watch The Movie Yourself

If this was my first time watching Beetlejuice as an adult, I would totally assume that Barbara and Adam would come swimming to the surface at any second, given a.) how short of a drop it was, and b.) the fact that the car windows are open. Maybe a bridge accident was the easiest and least expensive way to have the couple die off early in the movie? Either way, now that I've noticed this detail, it's all I can focus on. (You're welcome.)

But as far as second-guessing the deaths in Beetlejuice, it’s probably fair to suspend your disbelief. In a movie about ghosts who can manipulate people into performing a dinner dance party routine, some flaws with the car accident scene can be overlooked. Though once you realize the error, you can’t really forget about it. Realizing that the whole car accident thing in Beetlejuice isn’t without a few flaws might not make you rethink the movie as a whole, but it will definitely change the way you see it, since the death could have (and probably should have) played out a little differently.

This article was originally published on Oct. 5, 2017