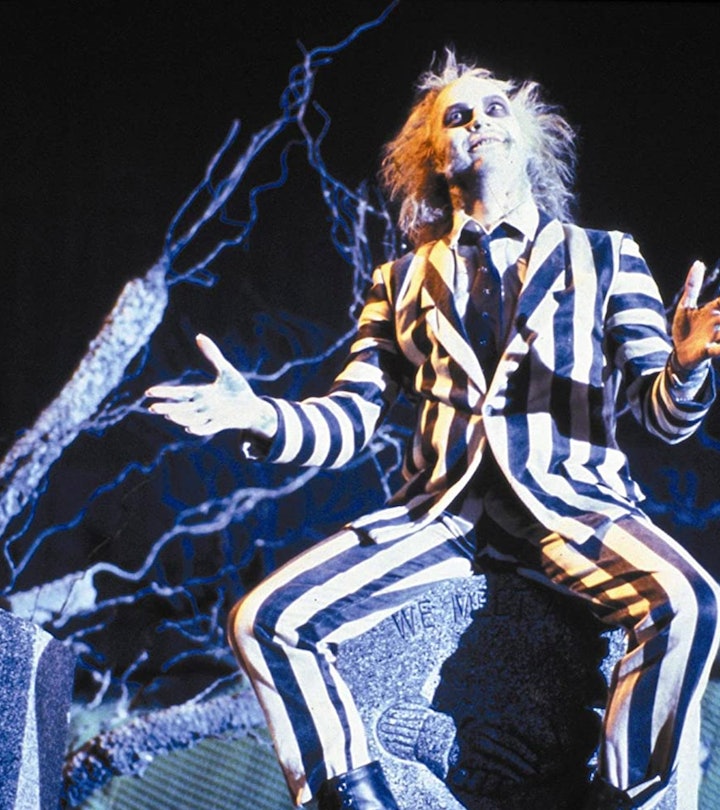 Is Beetlejuice Appropriate For Kids To Watch?

I love to cuddle up with a cup of hot cocoa, turn off all the lights, and watch a spooky movie with my family during Halloween season. Classics like Hocus Pocus and Ghostbusters are fun favorites, and anything made by Tim Burton is usually fair game, but is Beetlejuice OK for kids to watch? I really want to introduce my kids to this '80s classic, but when is the right time?

Say his name three times to make him appear if you dare, but you may want to exercise a bit of caution if you plan to watch Beetlejuice as a family this Halloween. Yes, Michael Keaton is still just as hilarious as ever and you'll definitely get a kick out of singing and dancing to "Jump in the Line," but for young kids, the concept of spirits who haunt their home's new inhabitants and all that goes with it could be a bit much.

Back in 1988, Beetlejuice received a PG rating, according to IMDB. First established in 1968, the Motion Picture Association of America (MPAA) rating system classifies films based on their content so that viewers can easily determine whether or not a movie is appropriate for a certain age group. A PG rating means parents are urged to provide "parental guidance" as "some material may not be suitable for children," according to the MPAA.

If you haven't seen the iconic film in a while, taking the time to re-watch it before you decide whether or not to let your kids view the movie could be a good idea. There is definitely some coarse language, a few scary or gory images, and both sexual and suicide references that some kids might not be ready to digest quite yet. However, the decision of whether or not Beetlejuice is OK for kids to watch truly boils down to your personal family values and what you think your own kids can manage.

For example, my kids all know that they're not allowed to use curse words, so some adult language throughout a movie won't prevent me from showing it to my kids. They're all old enough to understand the concept of hearing a word like "sh*t" without repeating it. Parents on Common Sense Media reported on the cursing throughout Beetlejuice, which includes two F-bombs.

Another strong point of caution for parents on Common Sense Media are the sexual references made. At one point during the film, Beetlejuice tries to kiss Barbara without consent and then lifts her skirt. He's also invited into a brothel of sorts by scantily clad women, and Lydia mistakes ghosts moaning for her parents having sex. While no outright nudity is present, these are definitely instances to take into consideration depending on your children's ages and awareness of issues like consent.

Although Beetlejuice as a whole isn't considered an overly scary film, there are some instances of graphic images that kids who are easily spooked may not handle well. A woman blowing cigarette smoke through her slit throat and bloody limbs shown in the afterlife waiting room are prime examples. Personally, the giant worms in the dessert chasing everyone still freak me out a bit as an adult, and I know that scene would probably give my youngest nightmares.

Additionally, Common Sense Media noted that suicide contemplation is another heavy topic in the movie that children may not be ready to digest. Unless your kids already have a strong handle on the subject, this may be something to talk about prior to watching Beetlejuice together, lest you have to stop and explain during the movie.

Despite the PG rating by the MPAA, because of the curse words, scary moments, and various adult references, Common Sense Media rated Beetlejuice as appropriate for ages 13 and up. However, you know your kids better than anyone. If you feel like your kids are mature enough and aware enough to handle the subject matter, Beetlejuice is still a zany and belly-laugh-inducing way to get some spooky feels in as a family this Halloween.

This article was originally published on Oct. 3, 2020