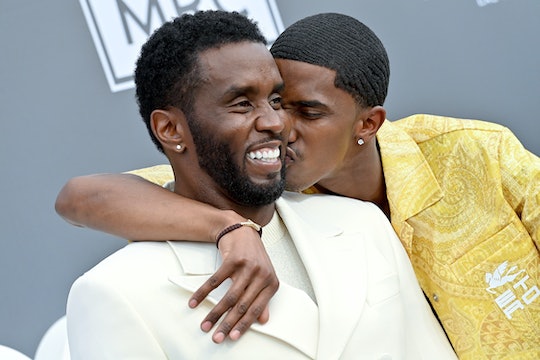 Diddy hosted the 2022 Billboard Music Awards and made sure the special night was a “family affair.”

The 2022 Billboard Music Awards show was a family affair for Diddy. The music mogul, who also likes to be called Love these days, was the host for the BBMAs and took his whole family with him to share the special evening.

Five of Diddy’s kids attended the Billboard Music Awards on Sunday. His sons, Quincy, 30, and Christian “King” Combs, 24, as well as his daughters — Chance, 16, D'Lila Star, 15, and Jessie James Combs, 15 — were all there to support their dad.

Diddy has six children in total. He adopted his oldest son, Quincy, after starting a relationship with his late partner, Kim Porter. Together, the two welcomed King and twins D'Lila Star and Jessie James. The 52-year-old icon also shares his daughter, Chance, with his ex Sarah Chapman and his son, Justin, with designer Misa Hylton, who was also at the BBMAs.

Also in the family entourage was Diddy’s mother, Janice Combs. The rapper’s whole family sat in the front row with Mary J. Blige, who was honored with the Billboard Icon Award.

In an interview with Billboard, Diddy said his intention as host was to focus on love and forgiveness. “As a musical family, none of us are saints; none of us are without things that happen to them in life. So one of the things I’m doing directly is un-canceling the canceled,” he told Billboard. “That’s breaking news because people haven’t been about uncanceling. But canceling is a trend that needs to stop.”

He added, “I wanted to make the whole show a family affair with people that I love and respect.”

Diddy is not only a multimillionaire music mogul but he is also a true family man. Last August, he and his daughters posed together for the September issue of Vanity Fair. And just last week, he released a video and song on his Instagram and TikTok featuring all of his children called “I Love My Family.”

Diddy has been through a lot of ups and downs, but prioritizing his family has helped bring some positivity into his life.

“For me, my life got better because I was running myself into the ground and I wasn't taking enough time for my family and for myself. It's really been a blessing,” Diddy told Clive Davis during the virtual pre-Grammy Gala last year. “I lost the mother of my children and the time that my kids and I were sequestered together, it helped me to make up for all those years I was on tour and to get closer to my family. For me, it's been a blessing but really using the time to become a better father and a better person.”