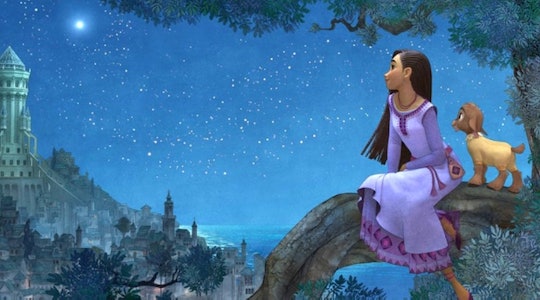 The animated movie will dive into how Disney’s iconic wishing star came to be!

Afro-Latina actress, Ariana DeBose, will star as Asha in Wish. Asha is a “17-year-old heroine who’s driven, incredibly smart and an optimist, a sharp-witted leader in the making who sees darkness that others do not. She’s navigating a Kingdom of Wishes, where wishes can literally come true. Asha makes an impassioned plea to the stars, wishing for guidance and help, and ends up bringing an actual star — a cosmic force that’s a literal ball of energy and communicates through pantomime — down from the sky,” according to a synopsis on Deadline.

Asha is slated to be Disney’s first Afro-Latina heroine. Disney’s first Black princess of course is Princess Tiana of The Princess and the Frog, played by Anika Noni Rose. At the moment, Asha is not being considered a Disney princess, a Disney source tells Romper.

DeBose spoke to Deadline about how her character reminds her of herself. “She’s got many parts to her,” she said. “She’s so smart, she’s got a great sense of humor, she’s trying to take care of the people she loves most in the world. And she’s a leader and doesn’t realize it, she’s just living and doing and learning along the way. She doesn’t ways get it right, which is the definition of being human.”

“But I think audiences can be excited about original songs, an original story, its all the Disney magic you know and love but it looks like us,” she added, referring to the minority representation. “And that’s exciting. I’m really excited that little girls can identify with this character.”

Back in March, DeBose made history as the first Afro-Latina and first openly queer woman of color to win an Academy Award for her role in Steven Spielberg's West Side Story. “I promise you there is a place for us,” she said during her acceptance speech.

Disney’s first look at the animated movie shows Asha sitting on a tree, looking at the twinkly stars in the sky. Oh, and there’s a baby goat.

Get ready to sing along.

Like DeBose touched on, Wish will feature original songs, including titles by Grammy nominee Julia Michaels and an original song performed by DeBose titled “More for Us.”

When will Wish premiere?

Directed by Frozen’s Chris Buck and Raya and the Last Dragon’s Fawn Veerasunthorn, Disney’s Wish will premiere in November 2023 and it can’t come soon enough.

More Like This
Disney's Upcoming Mufasa Movie Will Tell Us The Origin Story Of Simba's Dad
Watch An Exclusive Clip From Trick or Treat Scooby-Doo!
Leonardo DiCaprio Nearly Had A Role In 'Hocus Pocus' & More Fun Facts You Didn't Know
Here's Where The 'Hocus Pocus' Characters Are 30 Years Later