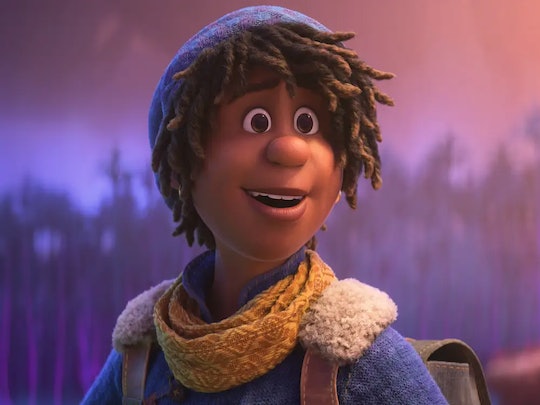 Ethan gets tongue-tied around his crush.

Disney’s new feature-length animated movie Strange World is all about adventure. And family, the Clade family specifically. Ethan Clade is the youngest member of the adventurous Clade family, following in the footsteps of his father and his grandfather in their quest to explore new worlds à la Jules Verne. Adventure and exploration and family dynamics are not new territory for Disney, but there is one element of Ethan’s story that does break new ground. He is the first openly gay teen character in a Disney animated feature and fans are so excited.

Strange World follows Ethan (voiced by Jaboukie Young-White), a young gay teenager whose identity is fully supported by both of his parents, Searcher (Jake Gyllenhaal), and Meridian (Gabrielle Union). Searcher and his family have eschewed a life of exploring in favor of becoming a farmer after Searcher’s own adventurous father Jaeger (Dennis Quaid) went missing when he was a child. The family is called into action by Callisto Mal (Lucy Liu), the president of the land of Avalonia who leads them to a strange new world. There the family encounters animals and plants they’ve never seen before, and one person they know all too well. Jaeger Clade, who has been missing for years.

While the family is dealing with this big adventure, Ethan is dealing with his own incredibly relatable drama. He gets tongue-tied whenever he’s around his crush, a boy named Diazo.

Perhaps the most refreshing aspect of Ethan’s openly gay storyline is how his family embraces him exactly as he is without question. “The thing that’s really cool about him is that he’s able to come into his own in an environment that is ready to accept him and support him,” Young-White told Geeks of Color. “Ethan isn’t really grappling with his queerness as this weighty thing. He just has a crush.” Young-White went on to note that “seeing yourself reflected in a way that is not making a big deal about who you are” will hopefully resonate with all audiences.

Certainly Disney fans are excited to see it. “IDC if strange world has the 7th or 8th first openly gay main character. I'm still gonna watch it cuz I love seeing black queers in film,” wrote one social media user, while another noted that Strange World “has a queer romance that is far more than a fleeting kiss to be missed in the background. A charming little film.” Finally, this social media user broke down exactly what was so beautiful about the film, “in strange world jake gyllenhaal voices the father of the queer biracial son voiced by jaboukie — the house of mouse has never made a more inspired choice in their 100 year history.”

As Jaboukie Young-White noted, Ethan’s storyline is not one full of weighty struggles or worry. He is who he is, and he is loved for it. If that’s not reason enough to see Strange World, now in theaters, I don’t know what is.

More Like This
Brandy Will Play Cinderella Again In The Disney+ Movie The Pocketwatch
Exclusive: 'Firebuds' Dives Into Hanukkah Traditions In Festive New Episode
Surprise Your Kids With This Exclusive Sneak Peek At Mickey Saves Christmas
All The Nights The Grinch Airs On TV In 2022