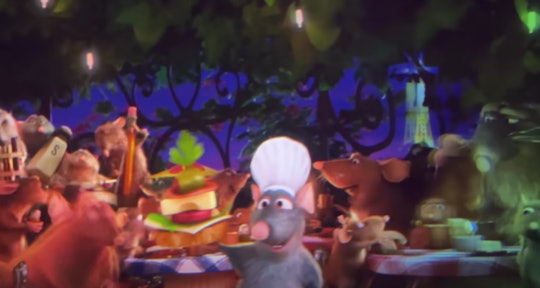 If you don’t mind traveling as a rat.

Remy’s Ratatouille Adventure is a new ride opening in the French pavilion at Epcot Center in Orlando, Florida. The ride is based on the 2007 animated Disney/Pixar movie Ratatouille, all about a young French rat (Patton Oswalt) who is secretly an amazing chef dreaming of cooking in a Parisian restaurant. The film was hugely popular not simply because it was a fun story but also because it was incredibly loyal to the dreamy look so many of us imagine when we think of Paris. So too is the new ride.

In the unofficial virtual tour of Remy’s Ratatouille Adventure shared on YouTube by Attractions Magazine, passengers experience life as though they were shrunk down to the size of the famous rat. Running around the kitchen trying not to be stomped, having a little party with their fellow rats, and basically just living it up in Paris. Also the wallpaper in the lineup is a real esthetic.

The new ride opens with passengers walking through a nighttime rooftop scene in France, with Remy’s favorite chef Gusteau chatting away in French and then English from a billboard. From there, passengers board little cars shaped like mice for a trip through the restaurant before heading to a rat party. A similar ride was opened in 2014 in Disneyland Paris called “Ratatouille: Remy’s Totally Crazy Adventure.” Although I sort of wonder if it would feel redundant going on a special tour through Paris while you’re in Paris.

“Remy’s Ratatouille Adventure” officially opens on Oct. 1 in the France pavilion if you want to visit in real life. If you do, definitely try out some of the delicious crepes, gluten-free galettes, and other fine French cuisine at La Crêperie de Paris, opening on the same day. If you can’t make it to France, this is obviously the next best thing.