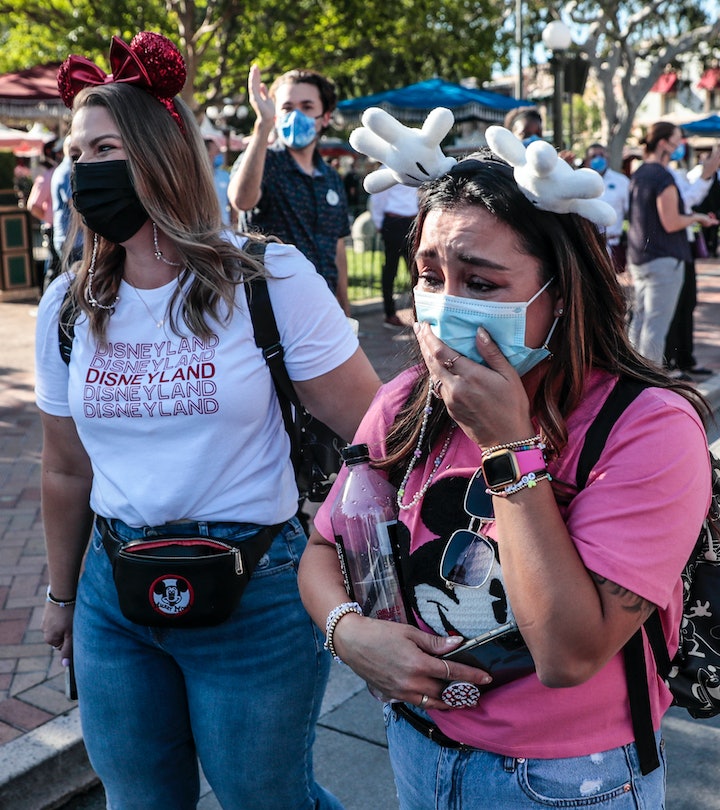 Disneyland Is Open Again, Here Are 10 Pictures Of People Losing Their Minds

Tears streamed down the faces of guests and staff as they returned to Disneyland more than a year after the theme park had been closed due to the coronavirus pandemic.

The gates to Disneyland reopened Friday after being closed for more than a year in an attempt to limit the spread of the novel coronavirus. But while the Happiest Place on Earth is, of course, a place of unfettered happiness, Disneyland’s long-awaited reopening was also an emotional homecoming for guests and park staff, many of whom cried tears of joy and relief upon entering the park.

Disney announced in March 2020 that surging coronavirus cases had spurred it to close Disneyland in Anaheim, California, and Disney World in Orlando, Florida. By the end of the month, all eleven of Disney’s theme parks had been closed, including Disneyland Paris and Tokyo Disneyland.

In July, Florida officials allowed Disney World to reopen with certain precautions like temperature checks, mandatory masks, and social distancing. But across the country in California, where an executive decree from Gov. Gavin Newsom kept Disneyland shuttered, the road to reopening has been significantly more difficult. In October, California state officials unveiled reopening guidelines for large theme parks like Disneyland that stopped parks from reopening until the county they are located in reached minimal COVID-19 spread and entered the state’s least restrictive “yellow” tier. Disneyland President Ken Potrock slammed the guidelines as “arbitrary” and “unworkable” and threatened to join other large theme parks in suing the state.

Then in March, California released new guidelines that effectively gave Disneyland a green light to reopen. The theme park began recalling furloughed staff for training almost immediately in preparation for its April 30 reopening.

An All-Hands On Deck Welcome

Hundreds of cheering and waving Disneyland staff and cast members lined Main Street USA to welcome guests as they arrived inside the park for the first time in over a year.

For cast and guests alike, Disneyland’s reopening day proved to be an emotional moment.

Guests who returned to Disneyland during its grand reopening weekend found none of the theme park’s magic had disappeared despite being shuttered for more than a year.

At the moment, Disneyland is only allowing California residents to make reservations for entry. Guests should expect to have to wear face masks while inside the park and follow rules for social distancing, such as forgoing hugs or handshakes with characters. Socially distanced selfies, however, are more than OK.

More Like This
The FDA Has Approved A Covid Booster Shot For Children Ages 5 To 11
12 Last-Minute Vacation Spots For Memorial Day
It's Not Just Covid: Doctors On Why Everyone's Getting Sick Right Now
You Can Walk Through Barbie's Dreamhouse & Fulfill Your Childhood Dreams This Summer