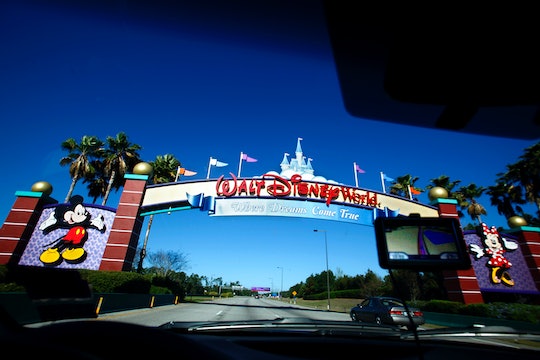 Disney World, Disneyland "Will Remain Closed Until Further Notice" Due To Coronavirus

As the number of confirmed coronavirus cases continues to rise, more and more Americans have been urged to stay home as much as possible to help limit the spread of COVID-19. Meanwhile, schools and nonessential businesses have closed and the federal government has advised against gathering in groups of 10 or more for an extended period of time. In light of the latest guidance regarding social distancing, all Walt Disney theme parks followed suit earlier this month, but how long will Disney parks be closed due to the ongoing outbreak?

A spokesperson for The Walt Disney Company tells Romper in an emailed statement that parks will "remain closed until further notice."

"While there is still much uncertainty with respect to the impacts of COVID-19, the safety and well-being of our guests and employees remains The Walt Disney Company’s top priority," the statement reads. "As a result of this unprecedented pandemic and in line with direction provided by health experts and government officials, Disneyland Resort and Walt Disney World Resort will remain closed until further notice."

In a statement issued earlier in March, Walt Disney World said its theme parks and Disney owned-and-operated hotels would be "closed through March 31." A temporary closure notice was also issued for Disneyland Resort and Disney California Adventure Park in Anaheim, California.

While both notices said the closures were "currently scheduled" to last through March 31, Disney noted that it would ultimately follow public officials' advice when it came to reopening. "We will continue to monitor the ongoing situation and follow the advice and guidance of federal and state officials and health agencies," the notice read.

Additionally, a travel alert for Disney Cruise Lines issued March 20 noted that all new departures had been suspended through April 12.

While Disney Parks may have initially hoped for an April 1 reopening, it became clear as March wore on that federal recommendations for social distancing and state-issued "stay at home" orders would likely complicate those plans. In California, for example, home to both Disneyland and Disney California Adventure Park, Gov. Gavin Newsom issued a statewide executive order directing residents to stay home unless working on one of 16 critical infrastructure sectors or in need of vital supplies or medical care. The order does not specify an end date, meaning Disney theme parks in California likely won't be able to reopen until Newsom lifts his executive order.

More than 28 other states have issued similar statewide orders directing residents to stay home unless absolutely necessary, according to the New York Times. For now, however, Florida Gov. Ron DeSantis has said he has no plans to order residents to stay home due to the unknown risks confinement could have on mental health and domestic violence. The state is home to the Walt Disney World Resort and has seen a number of cities and counties issue their own stay-at-home orders.

Further complicating plans for reopening the parks is the Centers for Disease Control and Prevention’s (CDC) March 15 recommendation that events and gatherings of 50 or more people be postponed for at least eight weeks. Under the CDC’s recommendation, the earliest opening date for theme parks would be sometime around May 10.

While Disney Parks have been closed since mid-March, cast members reportedly haven’t been without pay. A spokesperson for The Walt Disney Company tells Romper that the company has been paying cast members since the parks’ initial closures and plans to continue doing so through April 18. "In light of this ongoing and increasingly complex crisis, we have made the decision to extend paying hourly parks and resorts cast members through April 18," the statement reads.

While Disney Parks remain closed indefinitely amid the ongoing novel coronavirus outbreak, there are many ways parents and caregivers can create a little bit of Disney magic at home by taking kids on virtual Disney Parks rides.

This article was originally published on March 24, 2020