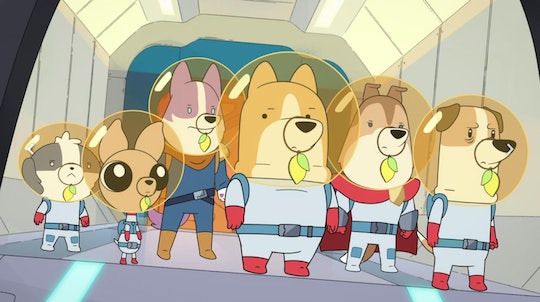 Dogs in Space premieres on Netflix on Nov. 18!

The future of space travel is looking very barky! Mankind’s salvation may be up to our best four-legged friends! Premiering on Netflix this Thursday, your kids will want to check out Dogs in Space, a new animated kids’ series about doggy astronauts going into space in hopes to find new territory to mark for them and us!

Dogs in Space Sees Pups On An Important Mission

The animated series is about “genetically enhanced dogs” who are “sent across the universe in search of a new home for the human race,” according to its synopsis on Atomic Cartoons. The dogs must find a plant for humans to live on and safely return home to their owners. “With Earth in danger, desperate scientists send genetically enhanced dogs into space to find a new world to call home,” Netflix’s description reads.

Show creator, Jeremiah Cortez, has been documenting his creation of Dogs in Space on his Instagram since it was announced over the summer. “It’s official. We are announced! Thank you to everyone on the crew that has put so much talent, skill, and passion into this story. I can’t wait to share it with you all,” he announced on Instagram.

In the trailer for Dogs in Space, the group of pups land on various planets to find the perfect home for dogs and humans.

Dogs in Space targets kids between the ages of 6 and 12, according to Atomic Cartoons. Common Sense Media, however, recommends the show for kids over 9 due to “frequent verbal meanness,” scenes where characters are in danger, and some characters that exhibit negative qualities like greed.

But parents know their kids best. And since there are 10 episodes that run about 19 minutes each, you could check one out to be sure before showing it to your kids.

Dogs in Space Premieres On Nov. 18

Netflix will be releasing all 10 episodes of Dogs in Space on Thursday, Nov. 18.