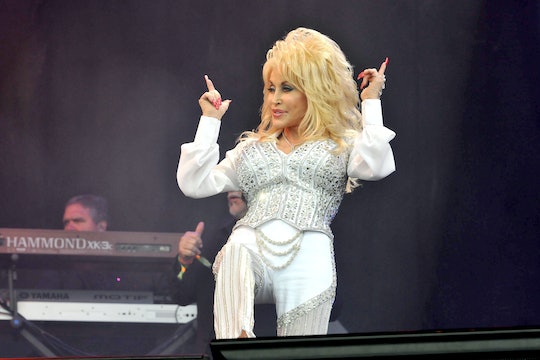 She is the "Book Lady." She helped to fund a coronavirus vaccine. And now, Dolly Parton has saved her child co-star, 9-year-old Talia Hill, from getting hit by a car. None of us deserve her, and yet she's still out there making the world a better place.

Talia starred alongside the "Jolene" singer in the Netflix original holiday musical Dolly Parton's Christmas On The Square, which would have presumably been exciting enough on its own for a 9-year-old girl. The Florida native was cast with her two brothers, 16-year-old Tristan and 13-year-old Tyson, to perform in the musical that was choreographed and directed by Debbie Allen, where she would eventually meet Parton. Talia's older brother Tristan told Inside Edition about his first impression of Parton, saying, "When you think of Dolly Parton, you are just like ’it is Dolly Parton’, but when you actually see her you are like ‘Wow, it’s Dolly Parton,” being in her presence lifts you. She is so amazing."

Talia was lifted by more than just Parton's presence, however. She was essentially lifted by the woman herself when she pulled the little girl out of the way of an oncoming car. As Talia explained to Inside Edition, she felt someone grab her and pull her back when a car was heading in her direction on set. "I looked up and it was Dolly Parton," she said. "I was like, surprised, I was like [gasp]. And she's like, 'Well, I am an angel, you know.' Cause she plays an angel in the movie. And I was in shock. She hugged me and shook me and said, 'I saved your life!'"

Dolly Parton, saving children from getting hit by cars like it's no big deal.

Dolly Parton saved a little girl from being hit by a car.

Parton has also done more than her fair share of trying to save the world. Back in April, the singer donated $1 million to the Vanderbilt University Medical Center, part of which went to Moderna's vaccine, according to The New York Times. As she told BBC One in November after learning that her donation helped to fund the vaccine, "I just felt so proud to have been part of that little seed money that will hopefully grow into something great and help to heal this world. I'm a very proud girl today to know I had anything at all to do with something that's going to help us through this crazy pandemic."

Dolly Parton. Truly the gift that keeps on giving.