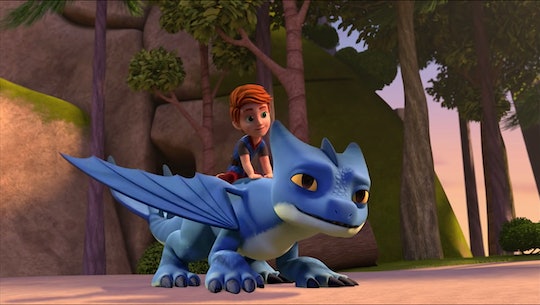 Take An Exclusive Peek At DreamWorks’ Dragons Rescue Riders: Heroes Of The Sky

It’s time for new adventures in the Viking and dragon world first brought to life in How To Train Your Dragon.

A Peacock original series promises to take adventure to new heights with a little help from five adorable young dragons. DreamWorks Dragon Rescue Riders: Heroes of the Sky centers around the next chapter in Viking twins Dak and Leyla’s life with dragons. As the latest spinoff in the popular How to Train Your Dragon franchise, it sees the twins team up with dragons to protect their Viking village of Huttsgalor. Get an early look at DreamWorks’ new action-packed series with the exclusive clip below.

Rescued and raised by dragons as children, Dak and Leyla are Viking twins who have grown up with a special ability to speak to dragons. In DreamWorks Dragon Rescue Riders: Heroes of the Sky, the pair have formed a team with five young dragons: a Fastfin named Summer, a Swiftwing named Winger, a Relentless Razorwing named Cutter, a Fire Fury named Aggro, and a Rockspitter named Burple. Together the gang defends and protects their home Huttsgalor.

In an exclusive clip shared only with Romper, Dak, Leyla, Summer, Winger, Cutter, Aggro, and Burple find themselves trapped on a sunken ship. With a giant octopus set out to destroy them and electric eels blocking their only escape, Dak and Leyla form a plan to use the eels and the octopus against each other. By luring the eels into the octopus’ chamber, the team hopes to scare the mollusk into releasing its ink, effectively clouding the water and blinding the eels from being able to see the gang as they make their escape.

But when the weight of their escape rests solely on Summer quickly figuring out how to use her newly discovered sonar power to guide the team out of the inky waters, the young dragon struggles with self-doubt. As her friends help her to believe in herself, Summer finds she’s capable of more than she thought — a lesson all children can benefit from.

Like its predecessor Dragons: Rescue Riders, which was released on Netflix in 2019, DreamWorks’ Dragons Rescue Riders: Heroes of the Sky is part of the larger How To Train Your Dragon franchise. However, while the original film was rated PG, the Rescue Riders series have been designed specifically for preschool-aged children with an entirely new cast of characters not seen in the original film.

Catch DreamWorks’ Dragons Rescue Riders: Heroes of the Sky when all six episodes of the original series become available to stream on Peacock on Nov. 24.