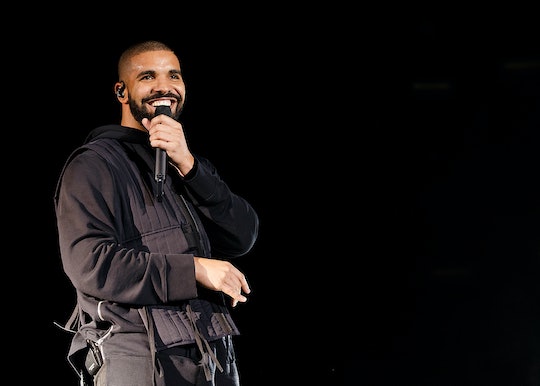 The 34-year-old rapper and former Degrassi star, whose real name is Aubrey Drake Graham, shares 3-year-old Adonis with model, Sophie Brussaux, according to Billboard. In the song, the proud dad raps about dropping his son off to school and picking him up, attending parent-teacher conference meetings, and parents asking if he knows Beyoncé and Nicki Minaj. You know, celeb dad banter.

“Yeah, dropped him off at school, big day for my lil' man,” Drake raps. “Recess hits, daddy prolly made another M (million). School bell rings and I'm out there to get him again. Yeah, teacher-parent meetings, wives get googly-eyed. Regardless of what their husbands do to provide. Askin' if I know Beyoncé and Nicki Minaj.”

Although this rap mentions his son, Drake rarely talks about his life as a parent. The “Take Care” rapper seems to be pretty private in that area and doesn’t share posts or pictures about his son too often on social media. Last December, the “God’s Plan” rapper shared pictures on his Instagram Story, showing him dressing his toddler. The two matched in all-black attire. The month before he posted an Instagram picture of the two of them snuggled up in bed. In the picture, Drake was leaning on his son’s shoulder with his eyes closed and Adonis was leaning his head on him, holding a bowl of food.

Although Drake seems to be opening up a little more about his son on the artistic side, the move to hide him from the world was never one of shame. In an interview with rapper Lil Wayne on Apple Music last May, Drake talked about revealing his son to the world for the first time in an Instagram post on March 30, 2020. He said it was not a move he had “talked to anybody about or anything” he had planned to do. “It was great for me. It was great to just share that with the world,” he said. “I just woke up one morning and I was like, you know what? This is just something that I want to do.”

“I want to be able to go places with my son and share memories with my son,” he added. “I don't want to feel like just because of a life choice I made to be a 'celebrity' that I got to make everybody live under this blanket... I just wanted to free myself of that.”

Perhaps the most interesting part about the lyrics are the parents asking him if he know Beyoncé and Nicki Minaj. Who could blame them!