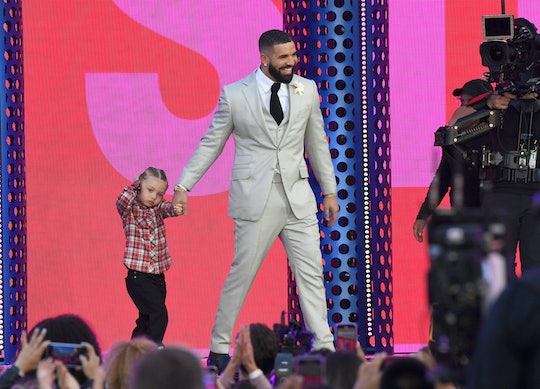 His emotions took over.

After keeping his son out of the public eye for so long, Drake is ready to gush about his little boy. In fact, Drake brought his son Adonis to the 2021 Billboard Music Awards, where he made his first TV appearance and clung onto his dad while accepting the award for Artist of the Decade.

The 3-year-old boy, who wore his hair in braids, stood directly on Drake’s side while clutching onto his dad’s trophy for Artist of the Decade. After keeping it together for most of Drake’s acceptance speech, Adonis tried to walk away before his dad had time to wrap it up. But the little guy’s emotions got too intense — he burst into tears just when Drake was thanking him and his family during his speech.

“To my beautiful family, and to you — I want to dedicate this award to you,” the “Hotline Bling” rapper told his son, lifting him up in the air, while chuckling. But Adonis had enough of being on stage. He immediately buried his face into his dad’s leg the second his speech was over. Hey, just because Drake was a child star (most known for his iconic role on Canadian teen drama Degrassi) doesn’t mean that his son is ready for a life of fame just yet!

Aside from having a famous dad and appearing on TV, Drake’s son, who he shares with artist Sophie Brussaux, is also just a normal kid who loves basketball. As Drake rapped in his March 2021 release, “Lemon Pepper Freestyle,” Adonis is a 3-year-old kid who goes to school. “Yeah, dropped him off at school, big day for my lil’ man,” he rapped. “Recess hits, Daddy probably made another M. School bell rings and I’m out there to get him again. Yeah, teacher-parent meetings, wives get googly-eyed. Regardless of what their husbands do to provide.”

While Adonis might not be super eager to jump on stage again, it seems like he is just enjoying being a 3-year-old for now.