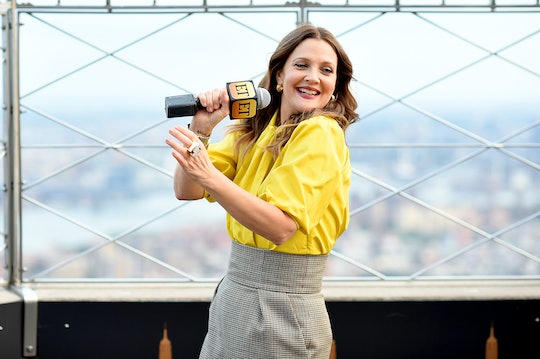 Drew Barrymore Can't Zip Up Her Pants, Either (1 More Reason To Love Her)

"And for anyone who has to put an extender on your pants, well just know, I feel ya."

Even A-list actresses are familiar with phrases like "eating your feelings away," as Drew Barrymore proved when she kept it real about her weight gain on social media Thursday. And the truth of the matter was that her pants did not fit, let alone zip up. Now, who can relate to this scenario? (Especially around the holidays.)

The actress shared the candid video while doing a fitting for The Drew Barrymore Show.

“Okay, so, we’re in the wardrobe closet and you know how normally we do these like, cute pictures and we’re like, ‘Oh my god, look at this amazing outfit and look!’ Well. Here. Let me keep it real with ya,” Barrymore said in a video on Instagram, showing off the unzipped back of her pants. “Yeah, that happened.”

The 45-year-old mom of two and host shared her wardrobe team had to make some adjustments for the waistband to fit.

“I guess I’ve been eating my stress a little bit lately and I have to have like, a brassiere thing put in there,” she said.

The entire clip was all in good laughs and fun. Barrymore joked that she planned to reevaluate her life this weekend.

“And for anyone who has to put an extender on your pants, well just know, I feel ya," she added.

Barrymore asked her followers in the caption if anyone could relate to her wardrobe dilemma, and (spoiler alert) they did indeed.

One viewer shared, "Has it ever happened to me?😌 Yes, but I will never give up with chocolate 🍫."

Others credited her affordable style and inspired a few fashion tips.

"Now I know what to do with those unused bra extenders," one fan commented.

Barrymore enjoys sharing behind the scene videos and pictures of her fittings. The 50 First Dates star's recent picture in Beyonce's Ivy Park received over 237K likes. The actress and show host hashtagged the IG picture as one of the #coolestmomentsofherlife.

Body image is a personal niche for the actress. Back in February, Barrymore shared her struggles with weight loss and gain after having her daughters, Olive, 8, and Frankie, 6. She said she felt like her body was a 'rollercoaster,' but the ride has been beautiful.

"It is a true miracle I was able to have these two girls. So whatever the aftermath on my body, well bring it on," she shared under a side by side IG post of her weight loss back in February.

Barrymore shared she used to hate getting dressed and cried in the closet. But to flip the script she realized she had to eat right and "work her ass off."

"So DON’T be fooled by what you see when people are thin right after baby. Don’t compare yourself to the magazines and the red carpets," she encouraged her IG followers. "If I looked decent on anything I have done since I had my two kids, I have clawed my way there. You can too!"