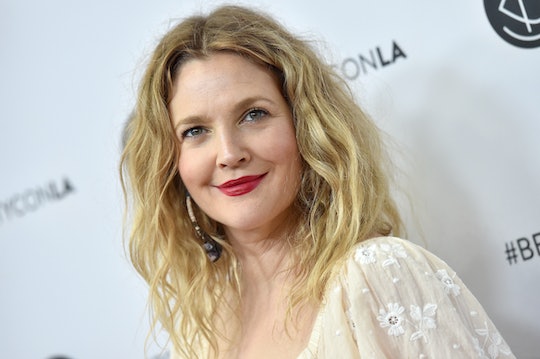 “Then I started crying, and then we were like, ‘It’s a Halloween miracle.’”

Halloween miracles might be hard to come by if you’re not a supporting character in a Charlie Brown holiday special. But during a recent visit to a pumpkin patch, Drew Barrymore and her daughters experienced one, thanks to the kindness of a mysterious stranger.

During an appearance on The Tonight Show Starring Jimmy Fallon on Tuesday, Barrymore recalled a time when she recently brought her two daughters — Olive, 9, and Frankie, 7 — to a pumpkin patch. They had found a large pumpkin, but couldn’t carry it to their car, so Barrymore told Jimmy Fallon that she used the opportunity to teach her oldest daughter a lesson about letting go.

“I had this whole life lesson with Olive about letting it go,” she explained. “We couldn’t carry it, you gotta make your peace with it. And she really did. And then we got to the check out stand and this guy wheel-barrowed it up and we both started crying. She had, like, learned to love and let go. And then I started crying, and then we were like, ‘It’s a Halloween miracle.’”

The stranger, who was wearing a beautiful Jesus around his neck, according to Barrymore, refused to accept payment for his good deed and never gave them his name or phone number. But, because of his kindness, the actress said she was “starting to have a religious moment.”

The Drew Barrymore Show host and her two kids were able to take the giant pumpkin home, where they carved it, saved all of the seeds, and had a “whole ceremony.” And although Barrymore never got to show the kind stranger photos of her pumpkin, she told Fallon that she hopes this story will make its way back to him. “If he ever hears this story, you really made me and my daughter cry and the pumpkin is beautiful,” she said. “It did make us believe in miracles.”

“The ‘Pumpkin Miracle’! I love that!,” Fallon joked. “Look for it next holiday season. Coming to the Hallmark Channel.”

Barrymore does know a thing or two about starring in romantic comedies like Never Been Kissed and 50 First Dates, and this “Pumpkin Miracle” film sounds like something that could seamlessly fit in to her credits. But instead of starring in the TV version of a feel-good holiday film, Barrymore and her daughters actually lived in one — if only for just a moment at the pumpkin patch.

More Like This
Marie Kondo Gives Up Tidying Post-Kids, Sparking Joy For Moms Everywhere
Sally Field Is The Ultimate Cool Mom Who Once Tried To Set Her Son Up With An Olympian
Keke Palmer Casually Drops Her Baby's Sex On Jimmy Fallon
Josh Duhamel Is Glad He Took Fergie's Advice About Dating After Divorce
What Parents Are Talking About — Delivered Straight To Your Inbox