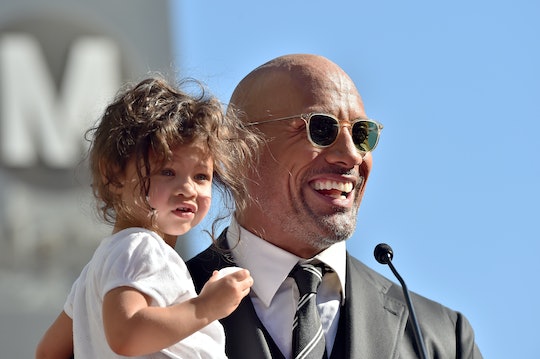 The little girls are “fascinated” by their dad’s former life.

Dwayne “The Rock” Johnson shared a new pastime he likes to share with his daughters: watching wrestling. During his recent appearance on Jimmy Kimmel Live, the former WWE wrestler and dad of three shared with guest host Kerry Washington that his daughters have taken a new interest in learning about his wrestling career and together they watch his old matches.

“They love seeing me, ’cause it’s almost like it’s a different lifetime,” he told Washington. “So they’re fascinated when they see me in old matches.”

The Jumanji star has three daughters: Tiana Gia, 4, and Jasmine, 6, whom he shares with his wife, Lauren Hashian, and an older daughter, Simone, 20, whom he shares with his ex-wife, Dany Garcia. Simone recently made her debut in WWE and premiered her promo at an NXT event on July 10. “She did so good,” he told Washington. “She went out there on the microphone, you’ve got to be poised when you go out there, and she’s got a cool wrestling name ... Ava Raine.”

Johnson wrestled for eight years in the WWE as The Rock before returning in 2004 at the age of 32. During an Instagram Q&A in 2020, he explained his reasons for leaving the industry. One was that his contract expired and he felt he “delivered” on his “agreement with the WWE” and his “long-time mentor and very, very good friend Vince McMahon.” The other reason was his desire to leave on top. “The risk was two-fold,” he captioned the video. “I retired on top as pro wrestling’s #1 draw.”

When he’s not reminiscing on his candy butt-kicking days with the kids, Johnson is busy doing activities like bunny tea parties. Back in May, the 50-year-old posted an Instagram video of him and his youngest daughter enjoying their daddy-daughter tea party with her stuffed bunny. “And she still refuses to believe that her daddy is actually MAUI,” he captioned the video, stating that Moana is one of her favorite Disney movies. “She always says, ‘Daddy, you’re not Maui, you’re The Rock.’”