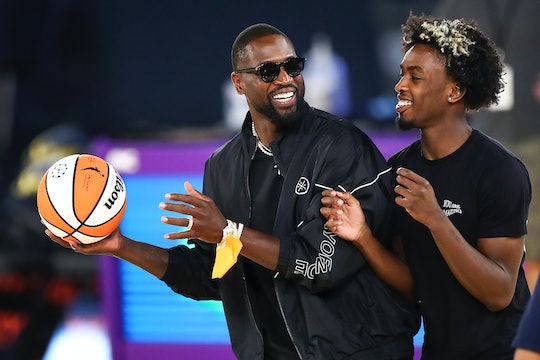 Dwyane Wade’s Son Zaire Is Following In His Dad's Footsteps... Right To The NBA!

The basketball legacy continues in the Wade family. Dwyane Wade’s son, Zaire, has been drafted into the NBA G-league. On Saturday, the 19-year-old athlete became the 10th overall draft pick for the Salt Lake City Stars, an affiliate of the Utah Jazz.

“Cue the air horn! We got our guy!,” the Stars tweeted along with a video of their draft pick for Zaire on the team’s Twitter. Wade also posted a tweet announcing his new gig. “Hate it or love it … the underdog,” he captioned a photo of himself.

Zaire is a 6’3″ guard and was a three-star recruit in high school, according to 247 sports. His father, who is part-owner of the Jazz, retweeted the announcement captioning it, “Wade Legacy Continues…”

According to Sports Illustrated, if the teen plays well in the G-league, he could end up playing for the Jazz. But Wade definitely has what it takes to follow in his dad’s footsteps; he’ll just have to top his dad’s 3x NBA Champion, one-time Finals MVP, and 13x NBA All-Star resume.

The father-son duo occasionally go one-on-one with one another and the retired Miami Heat superstar does not go easy on him, as shown in a December 2020 video posted by the Bleacher Report. “You want to be me, you gotta beat me,” Wade told his son in the video. Looks like that tough love paid off!

Dwyane shares Zaire and Zaya with his ex-wife Siohvaughn Funches. Zaire is supportive and protective of his dad, especially since Zaya came out as transgender last year.

“All the hate and backlash that @dwyanewade receives for bein a good father is crazy 2 me,” he penned a touching Father’s Day note on his Instagram. “A lot of you alls emotions comes out of your own insecurities from your fatherhood.. don't forecast that on us. What more do you want out of your dad than to love and support whatever you do in life. Despite all the hate and negativity that comes his way he still continues to be true to his family. Now THATS a father.”

More Like This
Patrick Mahomes & Brittany Matthews Welcome Baby #2
Aww! 2-Year-Old Archie Is "Very Happy" To Be A Big Brother
'Harry & Meghan' Shares Never-Before-Seen Photos Of Archie & Lilibet
Meghan Markle Wrote An Emotional Poem About Being A Child Of Divorce When She Was 12