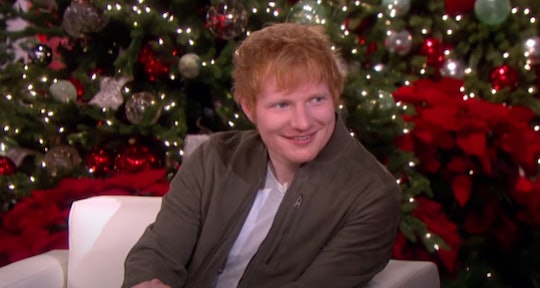 “There’s actually something in life that’s more important than my job.”

As one of the world’s most popular performers, Ed Sheeran’s life revolved around music for decades. And he loved it. As he explained to Ellen DeGeneres during an interview on The Ellen Show, “I started off my job being my hobby.” But things changed drastically for him in the past year. He and his wife Cherry Seaborn welcomed their daughter Lyra in 2020. And becoming a dad helped him shift his mindset away from his work, because he suddenly had something even better in his life. His little girl.

Pre-parenting, Sheeran’s schedule revolved around music, which then became his work. “I did [music] every day, and then one day I got paid for it and it became my job,” he explained to DeGeneres. “And then I did my hobby every day but it was also my job. And when I had time off I would still do it. Stop touring and go into the studio.”

Sheeran admitted he hadn’t really found anything to take him away from his music. Until Lyra came along. “This has actually given my purpose, that there’s actually something in life that’s more important than my job,” he said.

Now the proud dad is enjoying hanging out with his “cool” daughter, who is 15 months old and getting more mobile all the time. The “Shape Of You” singer has been marveling at his new role as dad ever since Lyra was born in September 2020. “Cherry gave birth to our beautiful and healthy daughter - Lyra Antarctica Seaborn Sheeran,” he wrote in the birth announcement shared on Instagram at the time. “We are completely in love with her. Both mum and baby are doing amazing and we are on cloud nine over here.”

Sheeran credited fatherhood as “the best thing that’s ever happened to me” in a Sirius XM interview in June, noting “there’s so many different sides and shades to it. There’s difficult days, there’s amazing, easy days, it’s just a roller coaster of emotions.”

Finding work-life balance through fatherhood is absolutely a gift, and it’s so lovely that Sheeran openly expresses how much being a dad means to him. Hopefully we can look forward to music about this very topic in the near future.