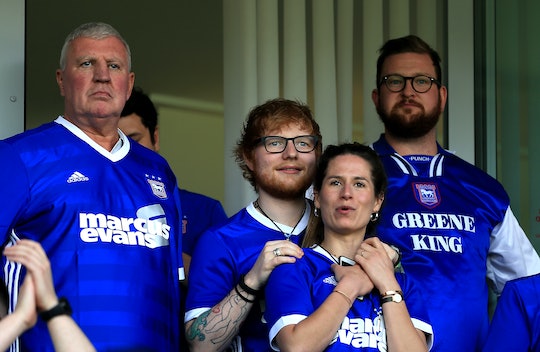 The English singer-songwriter drew inspiration from marriage and fatherhood for his recently released album Equals.

With his song “Bad Habits” up for Song of the Year at the 2022 Grammy Awards, Ed Sheeran can expect support from both his huge fan base and his wife. But who is Sheeran’s wife? And their little girl? While his music is well-known (who can forget his 2017 hit “Shape of You”), the details of Sheeran’s personal life have remained largely private. Recently, however, the singer-songwriter has been opening up about his experience with fatherhood after welcoming his first child last year. So here’s a look at what he’s shared so far.

Who is Ed Sheeran’s wife?

Sheeran is married to Cherry Seaborn, a woman he first met as a child growing up in Sheffield, England. But although they’d known each other for years, Sheeran shared in an interview on the podcast Armchair Expert with Dax Shepard that they didn’t become romantically involved until 2015, when they reconnected through a mutual friend while Seaborn was working as a financial advisor in New York City and Sheeran was on tour.

In fact, Sheeran admitted in the same interview that it likely “would have been a disaster” if he and Seaborn had dated in high school.

Their wedding was intimate and private.

Although Sheeran announced his engagement to Seaborn in January 2018, he didn’t confirm the pair had actually wed until he released his 2019 album No.6 Collaborations Project, which contained a song (“Remember the Name”) in which he referred to Seaborn as his wife.

Earlier this year, Sheeran told the Table Manners with Jessie Ware podcast that he and Seaborn were legally married in “a tiny, tiny event with basically no one there” on “a random day in the middle of January [2019].” Sheeran said the couple threw a large celebration months later for family and friends but sought to keep any and all photos from both events completely private.

Ed Sheeran welcomed a daughter in 2020.

Sheeran and Seaborn welcomed their first child together in August 2020, naming her Lyra Antarctica Seaborn Sheeran. Given the singer’s private nature, it’s not altogether surprising that he refrained from sharing a photograph of his newborn daughter when sharing news of her birth with fans.

“Last week, with the help of an amazing delivery team, Cherry gave birth to our beautiful and healthy daughter,” he wrote on Instagram alongside a photo of tiny socks. “We are completely in love with her. Both mum and baby are doing amazing and we are on cloud nine over here.”

Ed Sheeran wanted his daughter to have a unique name.

Over the summer, Sheeran gave fans some insight into why he and Seaborn had picked such a unique name for their daughter. “I realize some people think it's quite a strange name,” the British singer said during an interview on the British morning show Lorraine. “But my wife's called Cherry, and she is the only Cherry that I've ever met and I think that she's the only Cherry that she's ever met and I quite like that.” In contrast, Sheeran said he was often one of many Eds in school. By picking the name Lyra, Sheeran said the couple hoped to have given their daughter “a name that was unique so that she would be the only one.”

As for Lyra’s middle name of Antarctica, Sheeran said it came from a trip he and Seaborn had taken to the chilly continent. “I’ve basically toured every single continent but I've never been to Antarctica so that was always on our list," he told Lorraine. "So we went down there in 2019 and it was just incredible. The most amazing place on earth."

Lyra isn’t a huge fan of her dad’s music — yet.

While Sheeran has happily embraced the changes fatherhood has brought to his life, it seems his daughter may still be adjusting to having a famous singer as a parent. In May, Sheeran revealed Lyra was definitely not a huge fan of his music. “I’ll sing [my new songs] to my daughter, who’s not my biggest fan,” Us Weekly reported Sheeran said on Radio 1. “She just cries.”

According to Sheeran, Lyra doesn’t like anything loud or “belt-y” but has shown some appreciation for “Shape of You.”

Fatherhood and being married served as inspiration for his new album.

But although Lyra may not be a big fan of his music, Sheeran has said he took inspiration from becoming a husband and father when putting together his latest album = (pronounced “Equals”), which hit shelves Oct. 29, 2021.

“I’ve never really felt like an adult before,” the singer said in a recent appearance on Today. “I went into my 20s as a touring musician and I just toured the world and partied and whatever. And then I stopped touring, got married, had a kid, then my friend passed away and I turned 30 and all of these things sort of led me to be an adult for the first time and that’s sort of what I think the album is about.”

This article was originally published on November 4, 2021