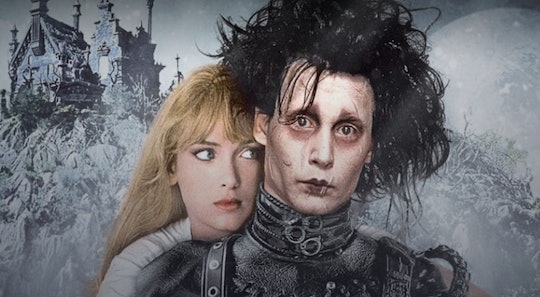 Who doesn’t want to root for the sweet, complicated Edward?

Tim Burton’s Halloween esthetic is sort of unparalleled. His movies like Coraline, Nightmare Before Christmas, Corpse Bride, and Frankenweenie all have this similar spooky-but-sweet, lovable soul behind the “monster” vibe that is pure Halloween goodness. Burton’s 1990 classic Edward Scissorhands in particular comes to mind around the holiday season, but is it one of those movies that you want to watch with your kids? Or should you put them to bed and take a trip down memory lane all on your lonesome? An argument could be made for both sides.

Edward Scissorhands tells the story of a young man who was created by a kindly scientist who wanted to find a way to animate a humanoid. Unfortunately, the scientist (played by the legendary Vincent Prince) dies before he can complete his creation, and the sweet, gentle Edward Scissorhands (Johnny Depp) was left to fend for himself with scissors for hands and a rather unusual look. Pale, interesting clothing, frightened eyes, you get the picture. Edward is accepted into the community by a suburban saleswoman (Dianne Wiest) and falls in love with her teenage daughter (Winona Ryder). While everyone seems to love him as a talented artist, things get complicated when he is falsely accused of committing a crime. He eventually ends up living in exile, in love with Kim for eternity as she withers in old age.

‘Edward Scissorhands’ has some mature themes.

What Are The Main Themes Of Edward Scissorhands?

One of the most prevailing themes of Tim Burton movies, perhaps especially Edward Scissorhands, is rooting for the underdog. Celebrating people who present as different from societal norms and embracing individuality. These are important qualities for kids to see played out on screen as they learn to navigate the world around them and might find themselves doubting their own sense of self. Embracing all that is different and unique and special about people on screen can be so powerful, especially in movies that are just genuinely great like Edward Scissorhands.

The Tim Burton classic received a rating of PG-13, which feels exactly right. Pre-teens will absolutely appreciate the themes of this film, but there’s a bit of sexuality (when one woman tries to seduce Edward) and some violence in the movie that might make it too mature for younger kids. Edward’s sweetness will also appeal to pre-teens, his innocence in a world where he struggles to understand things like lying and unkindness and cynicism. Much like many pre-teens who are just entering the grown up world themselves.