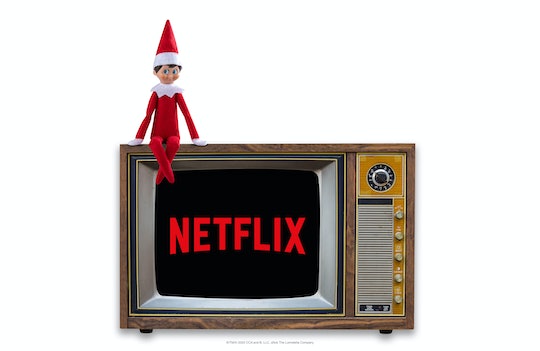 Parents, prepare to see a lot more of that precious and mischievous little elf who appears every holiday season. That's right, a ton of Elf On The Shelf will be coming to Netflix in the form of films and a TV series. But, hey, maybe parents can take a break from moving the elf every night and just say to kids, "look, he's on Netflix."

Netflix announced on Friday that it had acquired rights to the wildly popular Elf On The Shelf brand, which was based on the popular 2005 Christmas-themed book by Carol Aebersold and her daughter Chanda Bell. Aebersold and Bell originally self-published the book, which has gone on to sell 14.5 million copies across the world and remains a holiday bestseller every year. The sweet holiday tradition features a little elf who is adopted by a family and watches over the children to report back to Santa Claus in the North Pole.

And now Netflix plans to bring Elf On The Shelf films and animated TV shows to the streaming service, but don't expect all of the brand new content to be available immediately this holiday season. Aebersold and Bell, who founded The Lumistella Company which sold the rights for Elf On The Shelf to Netflix, are staying involved in the creative development.

"We are thrilled to be partnering with Netflix to create immersive and engaging original stories of Santa’s North Pole while providing heartfelt family-entertainment to fans all over the world," Bell told The Wrap in a statement.

Netflix tweeted the news on Friday with a message that read, "No longer content to just spend his nights making mischief in your home, The Elf on the Shelf is going to start working his magic on Netflix! Yes, that's right — the precocious sprite will soon be the star of films and series as our gift to you."

While the details remain shrouded in a bit of mystery, Netflix released a holiday poem hinting that the streaming service will be developing at least two original Elf On The Shelf projects to be released:

"You’ll get brand-new stories, straight from the source!/ Our love for the world will be easy to see/You'll soon hear us sing in Italian, Thai and Hindi./While we’re hard at work creating more stories and cheer,/there's two Elf Pets specials on Netflix this year!”

As parents and kids wait for fresh, original Elf On The Shelf content on the streaming service, Bell said in her statement to The Wrap that they are "pleased that fans in North America don’t have to wait to delve into the world of The Elf on the Shelf and their friendly Elf Pets" as two Lumistella films — Elf Pets: Santa’s Reindeer Rescue and Elf Pets: A Fox Cub’s Christmas Tale — will be available to stream on Netflix on Nov. 1.