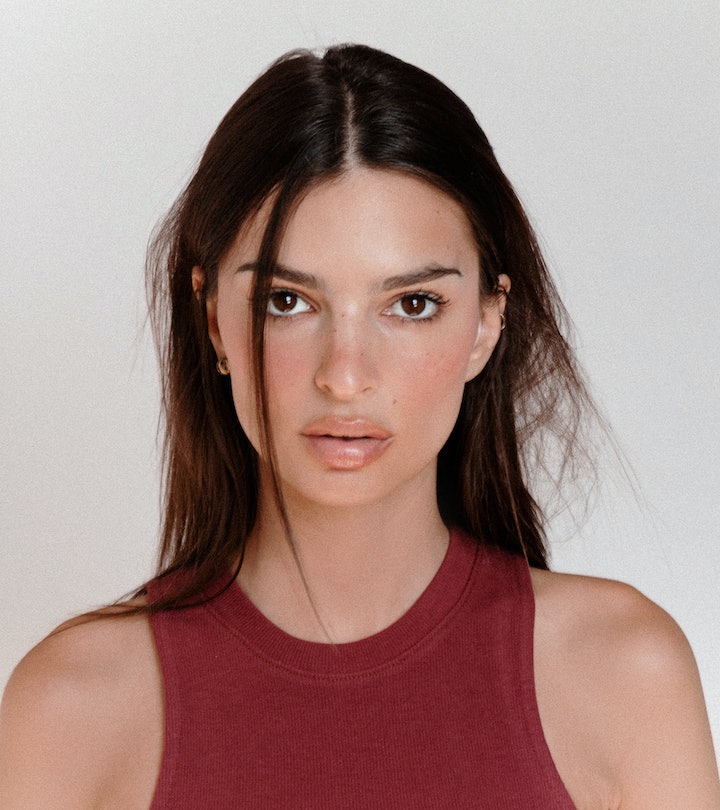 Emily Ratajkowski On The Balance Of Raising A Boy Who's Confident, But Not Entitled

When multiple hyphenate (model, writer, actor, entrepreneur, and now podcaster) Emily Ratajkowski was pregnant with her first child in 2020, she penned an essay for Vogue in which she mused over the various challenges — practical and philosophical — of raising girls and boys. A hypothetical daughter, she knew, would likely endure the same pervasive sexism and misogyny (internal and external) she’d experienced her whole life. A boy posed a different fear. “I’ve known far too many white men who move through the world unaware of their privilege,” she wrote, “and I’ve been traumatized by many of my experiences with them.” When I had a chance to speak with Ratajkowski over the phone, I was deeply curious about how this had born out for her two years later, 17 months after she’d given birth to her son, an adorable, blonde-haired, blue-eyed little boy named Sylvester, whom she calls Sly.

“I'm always thinking about how am I going to raise this child to not be entitled while also being confident,” she tells Romper, “And that's tricky. There's just so many privileges, honestly, that he is going to be used to. My instinct is just to provide him everything, but I am conscious of what that can breed, you know?”

“I do think the world beats people down, and so I really believe that you need to make your child feel unconditionally loved and appreciated for who they are... but yeah, also he's a boy who lives in the West Village!” she laughs. “I have to be really careful.”

Ratajkowski on a trip to Ibiza with her 17-month-old son Sly.

Ratajkowski speaks of her son with the loving reverence of any mother, with a splash of the kind of flourish you’d expect from an accomplished essayist (her well-reviewed debut book, My Body, is a New York Times bestseller). “People talk about nature and nurture, and I do think how you raise your child is really impactful, but as a person, it's like... he makes me believe in karma, in reincarnation. He makes me believe the soul, to be honest, because he's just so much already himself,” she says. “He just brings so much joy to my life. It's really incredible. I feel really lucky.”

“I think I'm somebody who some people feel is contradictory. I mean, I prefer ‘multifaceted.’”

But judging from some saltier comments on her social media accounts, some, it seems, can’t wrap their heads around Ratajkowski’s brand of motherhood... which is to say “a woman who doesn’t shy from the fact that she’s sexy just because she’s a mom.”

“It’s a new insult to be lobbed against me: ‘You're a mother. Cover up,’ or, ‘Go take care of your kid,’” she says with only mild annoyance. “It's just a new way to criticize a woman, and I think that people's brains explode because they're like, ‘Wait, she's a mom and she also is this way. She must be a bad mom.’ I think I'm somebody who some people feel is contradictory. I mean, I prefer ‘multifaceted,’ and now I just feel like being a mom is another facet of my identity.”

Fortunately, apparent contradictions and metaphorical tightropes are nothing new for Ratajkowski. She is, after all, a woman propelled to fame in 2013 by appearing in the music video for Robin Thicke’s “Blurred Lines.” She has written and spoken extensively about the co-existing power and commodification of her body, existing in this space even as she dissects it. If you look at her Instagram or TikTok accounts (which boast a combined 31.5 million followers), you’ll see a perfect distillation of this brand.

In one video, she can be seen lip-synching Taylor Swift’s “Karma” on a New York City street, serving looks in the perfect shade of red lipstick (Mac’s Spicy Pimenton, she shares in the comments when someone asks), prompting some fans and news outlets to question if the video is a not-so-subtle jab at her ex-husband, Sebastian Bear-McClard, whom she recently divorced. You know, standard celebrity stuff. In another, she opens her book to its epigraph, a quote from John Berger’s Ways of Seeing, the 1972 BBC series that coined the concept of the male gaze: “The real function of the mirror... was to make the woman connive in treating herself as, first and foremost, a sight.” Ratajkowski moves seamlessly between these two spheres of content, often with the same trademark placid — but never vapid — expression and affect.

Her online content is very stream of consciousness: if she’s thinking it, she’ll put it out there. Maybe she’s thinking about why #MeToo, as a movement, hasn’t changed anything. Maybe she wants to show off her Halloween costume over audio from Mean Girls. She leans into this blend of high brow and low brow content. In fact, her new podcast is even called High Low with EmRata.

The bi-weekly podcast, which premiered on Nov. 1, “[marries] high brow and low brow topics, exploring whatever is on Ratajkowski’s mind — from politics, philosophy, and feminism to sex, pop culture, and TikTok.” Tuesday episodes are conversations (“I'm kind of calling them conversations rather than interviews,” she explains) with assorted celebrities, authors, and friends; the second episode of the week is a segment called “EmRata Asks,” where she unpacks and breaks down issues that have been on her mind. (Subscribers can access a third episode in which she responds to listeners’ responses.)

Ratajkowski tells me that she’d been toying with the idea of starting a podcast for years, but ultimately decided she wanted to publish a book first. Essays, she felt, would be a better way to introduce the public to her point of view. “But the thing with an essay is it's a long process,” she says. “I want to choose my words carefully and think things through. A podcast is somewhere between a TikTok and an essay,” free from the pressure of perfect articulation she feels in writing that allows her to connect with her audience on a deeper level than a 15 second video.

“It's too exhausting to worry about what people think all the time. I'd rather just live my life and then lead by example.”

“I've just been recording and working on it for the past month or so,” she says, “and it's just crazy how much I personally enjoy it. I just think it's just so up my alley. And it'll shape-shift as it's being made and coming out, which I just really like about the medium.”

It might be tempting to think of Ratajkowski herself as a bit of a shape-shifter — a one-time video girl who is also a feminist essayist who is also a podcaster who is also a mom who is also just a beautiful celebrity having fun with her friends dancing on TikTok — but “shapeshifting” implies a change from one to the other. Ratajkowski contains all this at once, unabashedly but thoughtfully, with no real desire push back against the people who would try to imply any inconsistencies, especially when it comes to parenting.

“It's too exhausting to worry about what people think all the time. I'd rather just live my life and then lead by example,” she says simply. “I probably would've cared — I have cared in the past — more about those kind of judgments. I think becoming a mom, all I care about is what Sly thinks.”

Listeners can subscribe to High Low with EmRata on all major podcast platforms, including Apple Podcasts, Spotify and Stitcher.