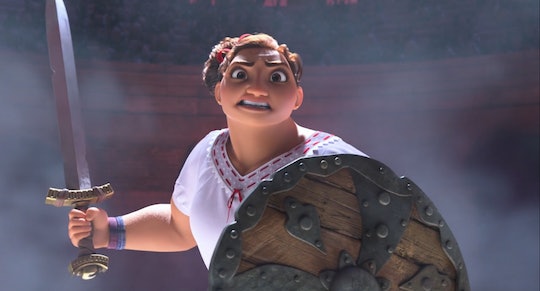 Since Encanto first came out back in November, fans have discovered plenty of interesting fun facts, fan theories, and Easter eggs from the film. Like, did you see Bruno creeping in the background during “We Don’t Talk About Bruno?” Or notice that the details in the family’s clothes reference their gifts? Have you ever thought about how the two family outcasts — Mirabel and Bruno — have green glasses and green eyes in the same shade and maybe that foreshadows their connection? But we were especially curious about one tidbit we’ve seen creeping up all over our social media feeds: the claim that demand for Luisa merchandise is outpacing that of Isabela, foiling Disney’s alleged marketing plans.

This claim has appeared in a number of places across social media platforms, but appears to have first appeared on Jan. 16 when, in a public post, Facebook user Devra Du’Ville wrote, “The artists for Encanto had to really fight Disney to let Luisa have big muscles....because we can't pretend Disney isn't superficial and misogynistic. Anyway. Jokes [sic] on them because little girls have GRAVITATED to this buff AF character and they were not prepared for the amount of demand for Luisa merch when they made a bunch of Isabella [sic] merch that isn't selling well bc they thought kids would like the classically beautiful character the most. They were wrong. Turns out the kids want giant muscle lady. Thanks. I love it.”

As of press time, this post has gained more than 35,000 likes and has been shared nearly 100,000 times. Most commenters responded positively, sharing how Luisa is a beloved character in their families.

“We want muscle lady and awkward ‘talentless’ girl,” one replied, referring to Luisa and Mirabel.

“My three year old mimics her dancing and it’s taken over,” wrote another.

One comment, which has been liked nearly 400 times reads, “I guess Isabella [sic] is not that perfect.”

(Romper reached out to Du’Ville for comment but has not received a response.)

“My favorite story about Encanto is how Disney assumed little girls would all gravitate towards the pretty one so they made a bunch of Isabella [sic] merch,” they tweeted, “but it isn’t selling because little girls prefer the strong one so now they’re making a bunch of Luisa merch.”

The comments, shares, and discussion surrounding this claim, in the aforementioned posts and elsewhere, generally takes a tone of jubilation, and it’s easy to see why: Luisa is great! And after decades of Disney Princess marketing created generations of women and girls with a very narrow view of “female role model,” Luisa — with her rippling muscles, deep voice, and even deeper vulnerability — is a refreshing change of pace. It’s even more encouraging to hear that little girls are finding themselves drawn to her, particularly in light of another viral (but unconfirmed) claim from former Disney character modeler Dylan Ekren who reportedly suggested, in a series of now protected tweets, that animators received pushback on the idea of a conspicuously muscular Luisa, noting, “I think we all just wanted to do it in a way that worked well with the style and really made sense for the character and I’m really proud of the way that she turned out.”

But here’s the main problem: this claim is entirely unverified. While Disney does appear to have released more Isabela-branded merchandise options than Luisa-themed, there’s been no official word from Disney marketing that has indicated any claim made regarding sales of one versus the other (Romper has reached out to Disney for comment). No reporting from a news outlet, major or otherwise, has been able to back up this claim with anything more than anecdotal evidence. In short, we don’t know if Luisa is outselling Isabela merchandise, if there’s a higher demand for Luisa merchandise than there is supply, or if sales for Isabela-themed items are floundering.

There’s another issue with the proliferation of this claim, and it’s perhaps best seen in a tweet from Twitter user @soapachu.

“Turns out children relate harder to women who are strong, honest, flawed and interesting than those who are just seen as beautiful,” they wrote.

And this misses the point on two levels, really (though, certainly, @soapachu is not alone in this interpretation of events). For one, the whole point of Isabela is that she’s more than “just beautiful” or perfect. Her beauty is a burden in the same way Luisa’s strength is — the only aspect of her that is appreciated by her results-driven Abuela. Isabela is deep and complex. Her beauty is incidental to who she is, not foundational — and it’s a point the movie makes in a show-stopping song, with lyrics like “so much hides behind my smile” and “I’m so sick of pretty, I want something true.”

For another thing: yeah, it’s great that Luisa is resonating with fans of all ages. That doesn’t mean we have to root for her against Isabela. Feminism isn’t feminism if one type of woman has to win at another’s expense: it isn’t a “versus” thing. Isabela merch doing well doesn’t take a thing from the Luisa character or vice versa.

In short, the appeal of this viral tidbit, while understandably appealing, does not yet hold up to scrutiny. In the meantime, we can just go ahead and love the entire Family Madrigal.