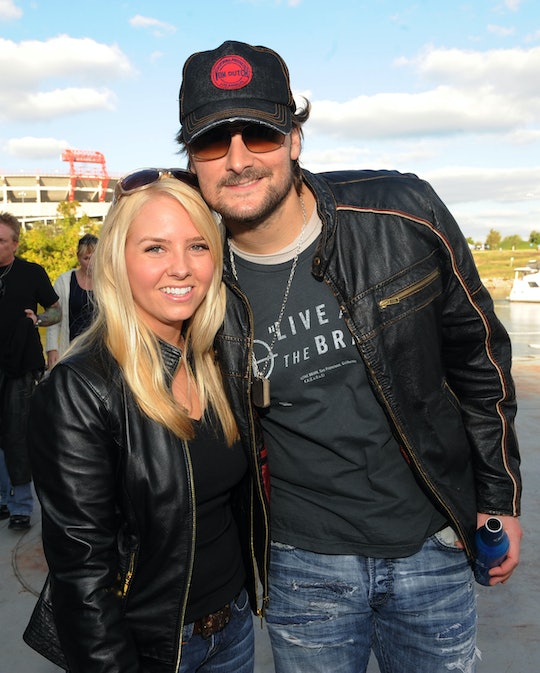 One of them is even named Hawk.

With Super Bowl LV is here and everyone is excited. To see the Kansas City Chiefs play the Tampa Bay Buccaneers, sure, but also to have a little musical entertainment. To kick things off, country star Eric Church will perform the national anthem alongside Jazmine Sullivan. And while most of us will be watching at home with some nachos or chicken wings in hand, Eric Church's wife and kids will probably be glued to their television at home and cheering him on in person during his big performance.

The 43-year-old country singer is scheduled to perform "The Star-Spangled Banner" with Sullivan at the Super Bowl, something he told People he never thought he would do. "I've said this forever: 'I will never ever sing the national anthem...' it's so hard. Except the Super Bowl," he told the magazine. "I'm not Chris Stapleton. I fully assumed they were never going to ask me." When he was asked to sing with Sullivan, however, he changed his mind about the prospect. "And then I heard her and I'm not missing a chance to sing with her," he told People. "And that was it. Once I heard her voice, I said, 'Okay, I'm in.'"

Now that Church has signed on to sing at Super Bowl LV on Feb. 7, you can bet that his wife and kids couldn't be prouder. But who are his biggest super fans?

He's Been Married To His Wife Katherine For Over A Decade

When Church married his wife, music publisher Katherine Blansingame, in 2008, he knew how to make the day special. He performed a song he wrote for her, "You Make It Look So Easy," at the ceremony, according to Country Living.

In 2012, Church told Taste Of Country Blasingame helps him with his work. "It's great now, because being a publisher and being somebody in the industry, I can bounce songs off of her and she has the knowledge, you know, to be kind of that sounding board of what I should cut and what I shouldn't cut," he said. "So, she's one of those in the inner circle that I run a lot of stuff by."

Beyond collaborating on music together, the couple also founded a nonprofit together in 2013, according to Wide Open Country. The organization, The Chief Cares Fund, raises donations for families in need in the country singer's home state on North Carolina, Tennessee, and sends aid to an orphanage in Nepal.

His Son Boone Inspired One Of His Songs

In October 2011, Church and his wife welcomed their first son, Boone. "Everybody always tells you what an awesome and unique experience being a parent is. Words can never do the feeling justice," the proud dad told People in a statement at the time. "I am very thankful and blessed to have a healthy and happy baby boy and baby mama."

Little Boone, who is now 9 years old, was also the source of one of his dad's songs — he wrote "Three Year Old" as an ode to his son and how he wanted him to use "every crayon" as he grew bigger.

His Son Tennessee Has A Fun Nickname

In 2015, Blansingame delivered the couple's youngest son, Tennessee Hawkins, according to Billboard, and the country star revealed at the time that they call him "Hawk" for short. "I'm thrilled that Hawk and his mom are doing well," Church told The Boot in a statement at the time. "We aren't sleeping very much, but we are enjoying every part of this incredible journey. I'm very blessed and thankful." Hawk will soon turn 6 years old.

Since their youngest's arrival, Church and his wife have worked hard to prioritize alone time, which isn't always easy with a bust work schedule and two kids. But as Church told Rolling Stone in 2016, he'll even get on a horse if it means hanging out with his wife. "I am not a horse person, but I’ll do it just to be with her for a little bit … She stays with me on the road. With kids, it’s hard, but we just try to find a quiet spot together, somewhere, sometime, and that’s usually enough."

As Church gets ready for his big performance at the Super Bowl, his family is sure to be cheering him on.