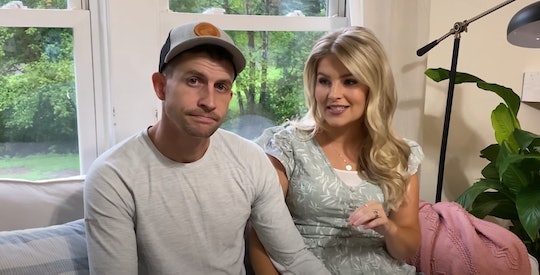 “We ARE EXPECTING...and still pinching ourselves to see if it’s real!”

The Bringing Up Bates brood is growing once again! After having experienced ruptured cysts and health complications, Erin Bates announced she is pregnant and expecting her fifth child with her husband, Chad Paine.

The couple took to Instagram where they announced the news with a maternity photo, surrounded by their four young children: 6-year-old son, Carson, 5-year-old daughter, Brooklyn, 3-year-old daughter, Everly, and 1-year-old daughter, Holland. “YES!!!,” they wrote in the caption of the photo. “We ARE EXPECTING...and still pinching ourselves to see if it’s real! God is so good!”

Over the past year, Bates has been open on social media about her health struggles, revealing that she had to have surgeries due to ruptured ovarian cysts that led to internal bleeding and the removal of one ovary, in addition to the removal of two-thirds of her second ovary. After being told that there was a “very small chance” that they would be able to have another baby, the couple relied on their faith and prayed to God for “just one more baby,” they explained in a YouTube video announcing their news.

The couple shared that the kids had been asking for another sibling, including oldest son, Carson, who shared the cutest story with his mom. “I was praying for a baby brother and then one day an angel told me that mommy was pregnant, but then I told mommy, and then she said that I couldn’t have one, but then she went to the doctor one time, and the doctor said she was pregnant,” Carson told the camera.

Bates said that she randomly took a pregnancy test about three weeks after Carson told her his story and got a positive result. “I think I had a heart attack because I was like, ‘there’s no way I can be pregnant.’,” Bates explained.

Bates is now in her second trimester, has had multiple ultrasounds, and has seen the baby growing. “We’re overwhelmed at God’s goodness because I know this is such a special blessing to have five little babies that God entrusted us with,” Bates explained, calling their little one on the way their “special miracle.”

It wasn’t an easy road for the couple to start their family. In 2015, halfway through her first pregnancy, Bates revealed that she had suffered multiple miscarriages due to a blood clotting issue. So it’s understandable why the couple is still “nervous and scared.” “She is of the utmost priority and I am definitely a little nervous for this one,” Paine said.

The couple revealed that their little one is due in January next year. “They’re all miracles, but this one is just a special miracle,” Paine said. “We’re super grateful and we’re really looking forward to the beginning of 2022!,” Bates added. “We’re going to add to our little family!”