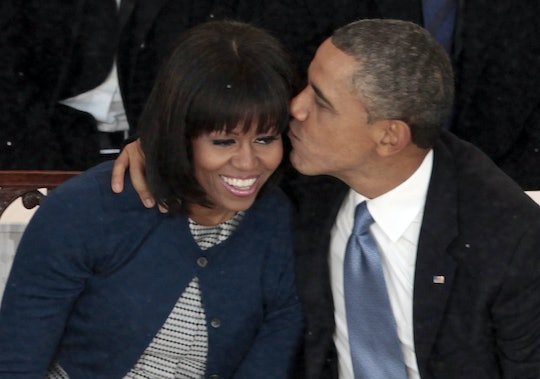 Exclusive: Obama Talks About How He Knew He Wanted A Family & Kids With Michelle

“That very first summer that we were together, I thought to myself, ‘This is somebody I could see spending my life with.’”

We know him as one of America’s most likable dads. A relatable father of two girls who has always been open about his love for his family. And now we know a bit more about how he got there. In an exclusive clip from the upcoming episode of his podcast with Bruce Springsteen, President Barack Obama said he knew he wanted a family with his wife Michelle after seeing her with her own close-knit family.

In an exclusive clip from the upcoming episode of their Spotify podcast Renegade: Born In The USA shared with Romper, Obama spoke about the early years of his relationship with Michelle and how they met. “So I meet Michelle while I am working at a law firm for the summer. She’s already a lawyer. She’s younger but had gone straight through school,” Obama told Springsteen. “I’d taken my diversion into community organizing after college so… so I’m an older law student. I’m 28. She’s 25.”

Obama said he thought Michelle was “very attractive” as well as “funny, and smart,” but another reason he fell for her was because she came from a big family. “She comes from a completely orderly family and that had a big extended family beyond that.” Obama shared. “... I looked at her and her family and I thought, ‘Oh, well they seem to know how to set this up.’”

That big extended family of Michelle’s got Obama thinking about what he might like his own family unit to look like. “I had a vision of wanting to make sure that my kids were in a place of love,” Obama explained, “and I liked the idea of… not necessarily a big family, but an extended family.”

Barack Obama was ready to have kids not long after meeting Michelle.

Michelle’s own early affirmation that she planned to be a mother also got the wheels of fatherhood turning. “Michelle, she wasn’t shy,” Obama said. “Pretty early on she says, ‘Look, I really value my career but the thing I really want to be is a mom and I really care deeply about family.’ That very first summer that we were together, I thought to myself, ‘This is somebody I could see spending my life with.’”

Things were a little different for Michelle. She told ABC News in 2008 that there “was a little intrigue” when the two first worked together at the Chicago law firm. “But I must say after about a month, Barack, about a month in, asked me out, and I thought no way. This is completely tacky,” she told the outlet at the time.

When Michelle’s father, Fraser Robinson, died at the age of 55 years old in 1991, Obama, her boyfriend of two years at the time, flew in to be with her and things seemed to change. “I think from her perspective she maybe saw I’m not a guy who was going to be afraid to be there for her when she needed it,” Obama told Springsteen during the podcast. And for his part, “I did not have a big panic about it.”

Catch the next episode of Renegades: Born in the USA when it debuts on March 29.