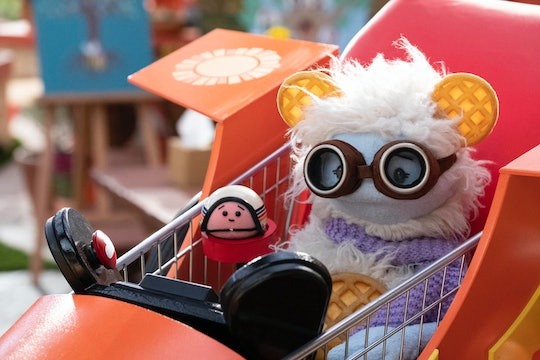 Former First Lady Michelle Obama’s cooking show teaches kids to prepare healthy food from around the world in a way even adults will find entertaining.

In Netflix’s new children’s show, a mochi ball and a puppet with waffles for ears land jobs at a supermarket owned by Michelle Obama, where a magical flying grocery cart takes them on culinary adventures around the world. Now, I know what you’re thinking: This show sounds totally bonkers. And believe me, it is — but in the best possible way. As you can see in this exclusive clip of Netflix’s newest kids’ series Waffles + Mochi shared with Romper, it’s the perfect mix of whimsy and rich cultural education. Even better, it’s entertaining enough for the whole family to enjoy.

Waffles and Mochi are the best of friends. You might even call them, taste-buddies. But they live in The Land of Frozen Food, where they lack the necessary fresh ingredients to fulfill their dream of becoming chefs. But Waffles and Mochi’s lives are changed when they get hired to work at the former first lady’s supermarket. It’s here that the taste-tastic duo meet MagiCart, a grocery cart capable of flying them to restaurants, kitchens, farms, and homes around the world. Like the home of a Japanese family who teaches Waffles and Mochi how to make miso, a traditional Japanese fermented paste made from soybeans, salt, and koji.

In an exclusive clip shared with Romper, Waffles and Mochi discover how salt and koji combine to give miso a uniquely balanced salty-sweet flavor. The puppet pals join the family in crushing soybeans by hand before mixing in salt and koji and hand molding the mixture into small balls.

Of course, Japan isn’t the only country Waffles and Mochi visit in their quest to become culinary experts. Netflix’s new show will see the pair jet off to other parts of the world as well, including Italy, where they’ll sample fragrant spices, and the Andes of Peru, where they’ll dig up potatoes. The pair will even explore the world of flavors unfolding in restaurants and kitchens within the United States, with stops in Savannah, Georgia, and San Francisco, California.

While Obama plays a starring role in Waffles + Mochi (and also serves as executive producer), she’s not the only celebrity viewers can expect to see on the show. Gaten Matarazzo and Zach Galifianakis, among others, are expected to drop in throughout the series to join Waffles and Mochi in their food-based adventures.

At its heart, Waffles + Mochi is a fun way to get kids excited about and interested in healthy foods. But Obama has promised that even parents will enjoy watching the series. "Waffles + Mochi, the entire concept is fun,” Obama told People. “It's approachable, it's an adventure, it's exciting, it's funny. More importantly, it's something that I would watch even if no kids were around."

Waffles + Mochi will premiere on Netflix on March 16.