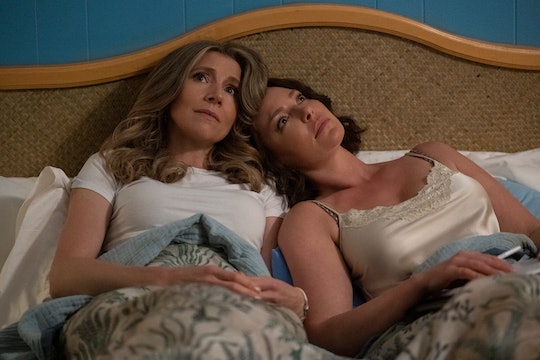 What happened to those “Firefly Lane” girls?

It’s been more than a year since we last caught up with Kate and Tully, the two best friends whose rift after 30 years together was still a mystery at the end of the first season of Firefly Lane on Netflix. That’s a long time to wait for an update, but it looks like that wait is close to being over. Netflic recently shared some updates about the second season of Firefly Lane, which is going to be a “super-sized” season starting very soon. Sadly, it will also be the final season.

Note: Spoilers ahead for Season 1 of Firefly Lane.

Where did Firefly Lane leave off?

Back in 2021, the first season of Firefly Lane, based on the series of the same name by Kristin Hannah, ended with a scene from a funeral set in the early 2000s. We don’t know who has died, but it could possible be Kate (Sarah Chalke’s) estranged husband Johnny Ryan (Ben Lawson), who is away covering the war in Iraq and appears to have been hit by an IED. We do know that Tully (Katherine Heigl) is not welcome at the funeral despite their lifelong friendship together. After watching these two grow together through the ‘70s, ‘80s, ‘90s, and beyond, it seems impossible that they could be torn apart. So what happened?

Season 2 of Firefly Lane will solve the mystery of their fractured friendship.

Netflix confirmed that fans will discover what happened to cause that fracture: “What could possibly have ended the tight-knit thirty year friendship of Tully and Kate, our ‘Firefly Lane Girls Forever?’ We'll learn the answer this season — but first — Kate grapples with the painful aftermath of Johnny's ill-fated trip to Iraq, while Tully faces a lawsuit after walking away from her talk show, and must start her career over from the bottom.”

There’s going to be a lot to unpack. Fortunately the series will have lots of time to tell these stories in the second season.

Season 2 will have 16 episodes divided into two segments.

While it is certainly heartbreaking to learn that the second season of Firefly Lane will also be the last, at least fans will be getting a much bigger season this time around. Netflix will air 16 episodes rather than the 10 episodes that were aired for the first season, and those 16 episodes will be separated into two segments.

The first half of Season 2 of Firefly Lane airs on Netflix in time for the holidays.

Season 2 of Firefly Lane premieres on Dec. 2 on Netflix, and will include episodes 201 through 209. This time around, Sully will look for the father she never knew while fans get a trip back to the ‘80s to see Kate and Johnny falling in love in the newsroom. We travel back even further to see Kate and Sully in high school in the ‘70s when Sully’s mom Cloud is sent to jail for dealing drugs and Sully must move in with her grandmother, leaving Kate behind on Firefly Lane.

No official release date has yet been set for episodes 210 to 216, but hopefully it won’t be too long.

Some familiar faces along with some new ones.

While Heigl and Chalke both return for their roles as Sully and Kate, there will be four new cast members join Season 2 including India de Beaufort, Greg Germann, Jolene Purdy, and Ignacio Serricchio.

With less than two months to go before Season 2 of Firefly Lane drops, you’re going to want to go rewatch the first season on Netflix. Just to catch up with Kate and Tully, and root for them to fix their friendship.

More Like This
'Workin' Moms' Has An Official Release Date For Its Final Season
'Wednesday' Creators Say They're "Talking Amongst Ourselves About Season 2
'Virgin River' Has Wrapped Filming Season 5 & OMG Is Charmaine Still Pregnant!?
Netflix Just Dropped The Bombshell Trailer For 'Harry & Meghan'