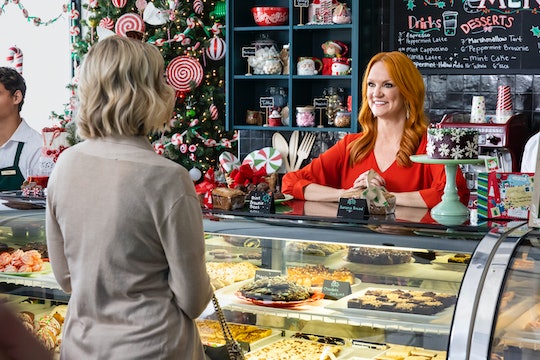 The Food Network Is Releasing A Scripted, Rom-Com Christmas Movie With Ree Drummond

It’s set in, wait for it, the Peppermint Capital of the World!

The Food Network is set to release its first full-length feature film and it has all the makings of a classic holiday movie with a super sweet twist. Candy Coated Christmas is basically a romantic holiday movie with some baking mixed in, so here is everything you need to know.

Candy Coated Christmas Is A Rom-Com

Candy Coated Christmas focuses on Molly Gallant, a marketing executive living in Beverly Hills whose life takes an unexpected turn when she learns that her family business is facing bankruptcy.

As Discovery+ explains, “The only way to recoup the funds she needs is to sell her late mother’s home in the town of Peppermint Hollow, Washington: ‘the Peppermint Capital of the World.’ Molly fully intends on getting the house on the market and get out of the cold to sunny Hawaii by Christmas, but then she meets the current renters, Noah Winters and his family, who warmly welcome them into their home, sharing their holiday traditions with her. It begins to seem as if fate, and the weather, are conspiring to keep Molly in Peppermint Hollow, even as if she begins to appreciate the value of family. And she and Noah may discover a new way to make a mint...together.”

The Trailer Is Here!

If you were waiting to get into the holiday spirit, the trailer for Candy Coated Christmas will certainly do the trick.

The trailer, which debuted on TODAY on Thursday, gives viewers a glimpse into the super cute town of Peppermint Hollow and the budding romance between Molly and Noah. But, with it being a Food Network film, after all, there are plenty of tasty looking treats and fun cooking montages to fill you up until the movie premieres.

Of course, a Food Network star has to be in the first scripted Food Network film. Ree Drummond, also known the host of Food Network’s The Pioneer Woman, will play Bee, the town’s bakery owner. “I am so incredibly honored that the Food Network asked me to play Bee the bakery owner in Peppermint Hollow,” Drummond said in a statement. “If I get to be in just one movie in my life, I want it to be a Christmas movie.”

A behind-the-scenes look at the film, shared to Food Network’s YouTube Channel, shows a sneak-peek of the sweets Drummond, as Bee, has whipped up at her bakery.

“I contributed some of my own recipes to Bee’s Bakery,” Drummond says in the behind-the-scenes video. “And it’s going to be exciting to see my recipes come to life.”

Candy Coated Christmas will premiere on Discovery+, Discovery’s streaming service, on Friday, Nov. 19. Although the film won’t be airing on the Food Network, you will see a few tie-ins to the film on the channel throughout the holiday season.

“With Candy Coated Christmas, we’ve created a unique viewing experience for the more than 100 million viewers who watch the Food Network every year, including the most ardent fans of one of our biggest stars, The Pioneer Woman Ree Drummond,” Kathleen Finch, the Chief Lifestyle Brands officer for Discovery Inc., said in a statement. “This is a movie gift for anyone who loves the holidays and has a passion for cooking, baking, but it’s also a respite from the daily grind. You can watch, breathe, feel, and believe — even if it’s only for two hours.”

More Like This
The Best Valentine’s Day TV Episodes For Kids
Marcel The Shell Is Heading To The Oscars!
20 Incredible Movies To Watch With Your Family During Black History Month & Beyond
Hey Fellas, 'Ted Lasso' Season 3 Is Coming Soon
What Parents Are Talking About — Delivered Straight To Your Inbox