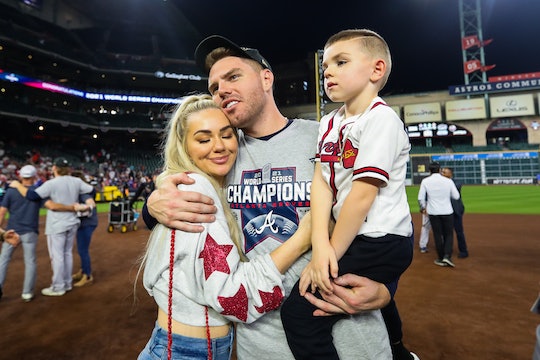 And they were right there to cheer him on when his team won the World Series!

For the first time since 1995, the Atlanta Braves won the World Series. It was an especially big night for first baseman Freddie Freeman, who has been playing for that outfit for 12 years and who, in a pure cinematic moment, caught the final out that sealed the World Series win for his team. His second team, actually. Because as far as he’s concerned, Freeman’s wife and kids are his first team. And they were right there to cheer him on in his big moment.

Freeman’s win wasn’t just a big moment for him, of course. It was a big moment for the whole family. His dad told The New York Times that Freeman, who lost his mom Rosemary when he was just 10 years old to melanoma, has always tried to be a good person to honor her memory. “He felt like, to honor his mom, he had to be a great kid,” Fred Freeman said. “That was it. When he was 10, that’s what he decided he was going to be. He always said, ‘I know mom’s watching.’”

He also honors his mom by the way he clearly adores his family.

He Met His Wife Chelsea A Decade Ago

Freeman’s happy little family all started back in 2011, when he met college student Chelsea Goff in southern Florida. The pair started dating around July 2011, and Chelsea eventually moved to Atlanta to be closer to Freeman. They dated for several years before getting married at the St. Regis in Atlanta in front of family and friends.

His Wife Was Featured On Say Yes To The Dress

Freddie Freeman’s wife was on ‘Say Yes To The Dress.’

Long before Chelsea Freeman became the social media influencer she is today, she was already a bit of a celebrity. Chelsea shopped for her wedding dresses, one for the ceremony and one for the reception, at the famous Kleinfeld Bridal in New York. She was featured on TLC’s Say Yes To The Dress, where she raved about then-fiance Freeman. “After three and a half years, he still opens my car door for me,” she explained. “And that never happens.”

Their Son Charlie Is 5

When the Atlanta Braves won the World Series, Freeman’s oldest son was quick to get in there to hug his dad. Chelsea and Freddie Freeman welcomed 5-year-old son Charlie on Sept. 15, 2016, just three days after his dad’s birthday on Sept. 12.

Charlie Is A Baseball Star In His Own Right

Charlie Freeman is something of a baseball celebrity in his own right. At just 5 years old, he’s already well known on his Little League team for being a heck of a batter, so much so that the Atlanta Braves have shared videos of his practice with his dad.

“Twins, With A Twist”

After Charlie’s birth, Chelsea and Freddie Freeman went through some fertility struggles and eventually decided to hire a surrogate to carry their baby. But in a sweet twist, Chelsea discovered she was pregnant almost immediately after. The couple call their two youngest kids “twins, with a twist,” per ESPN, and are now parents to three little boys.

The Freemans are a family of five.

In December 2020, the couple welcomed baby boy Brandon John Freeman. As he is just 10 months old, his little personality is still coming out. And how excited his parents will be to see it.

On Valentine’s Day 2021, little Maximus Turner Freeman joined the family. As Chelsea Freeman noted in an Instagram post, she and Freddie had “prayed for one, blessed with two.” The blessings seem to keep on coming for this family. And it couldn’t happen to a nicer guy.