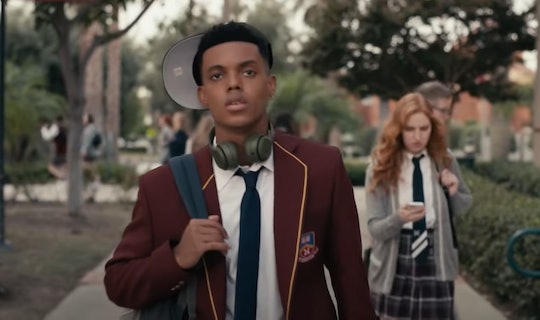 But the remake based on the iconic ‘90s Black sitcom is probably best watched after the kids go to bed.

There’s a new Fresh Prince sitting on the throne of Bel-Air. The iconic ‘90s sitcom starring Will Smith and the late James Avery is getting a 21st-century reboot in Peacock’s new show, Bel-Air. The series is getting “flipped turned upside down” by showrunner and filmmaker Morgan Cooper, who created the series based on his 2019 YouTube production that reimagined the classic sitcom in the present day.

The original series ran from 1990-1996 on NBC and made Smith into the blockbuster powerhouse we know him as today. The Fresh Prince alum produced the reboot and sought out Cooper after watching his YouTube video and was immediately on board for the project. “This is the first time that I heard something I was like yo that's an idea that is brilliant,” Smith told Cooper during a one-on-one interview with him on his YouTube channel.

Fast-forward, two years later and we have our reboot! So here’s everything you need to know.

What is Bel-Air about?

The first trailer for the series dropped on Jan. 10 and like its predecessor, it all started from “one little fight” in which “moms got scared” and Will is sent from his West Philadelphia neighborhood to live with his wealthy aunt, uncle, and cousins in California. But unlike the light-hearted, comedic undertones of the original, the new Will’s journey will take a darker and more dramatic turn of events. And yes, this means it's likely the new Carlton will not delight us with his dance to “It’s Not Unusual” by Les Reed and Tom Jones.

“They're two different takes on these characters,” Cooper told Entertainment Weekly. “You can't make The Fresh Prince of Bel-Air again. What they did is beyond words. It's so legendary [that] you would never try.”

Co-showrunner Rasheed Newson added that the reboot will speak to today’s generation. “We're speaking to the moment now, much like the original series did, Newson told Entertainment Weekly. “Young audiences will see in Will and Carlton and Hilary reflections of some of their own clashes with their parents. Each generation has to rewrite the rules.”

Jabari Banks will play the new Will Smith, followed by Adrian Holmes and Cassandra Freeman as Aunt Viv and Uncle Phil; Cocoa James and Akira Akbar as his female cousins, Ashley and Hilary and Olly Sholotan as Carlton.

Is Bel-Air appropriate for kids?

There is no rating yet for Bel-Air, but due to the mild profanity and violence, parental discretion is advised. While Smith’s ‘90s version was given an age-appropriate range of 11 and up by Common Sense Media for being a “good-natured sitcom” that can bring the family together, Bel-Air is perhaps best appropriate for a teen audience. The reboot is more of a drama and doesn’t have much of the comedic outtakes we are used to watching as a kid. It’s expected to hit some heavy and mature elements that would be better suited for older kids. Nonetheless, the essence of the original remains.

“The series was the fabric of so many of our upbringings,” Newson and another showrunner T.J. Brady told Us Weekly, “tied to memories and the joy of seeing ourselves represented on TV, so it is important to us to pay respect to its legacy.”

Mark your calendars: The first three episodes of Season 1 of Bel-Air premieres on Feb. 13 on Peacock TV.

More Like This
The White Lotus Is The Perfect Thrilling Treat For After The Kids Go To Bed
A New 'Golden Girls' Themed Restaurant Is Happening!
25 Great TV Shows About School To Watch As A Family
'Virgin River' Fans Can't Stop Cracking Jokes About How Charmaine Is *Still* Pregnant